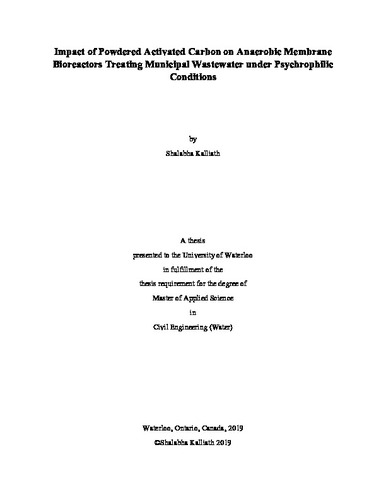 The anaerobic membrane bioreactor (AnMBR) is an emerging technology, which has the potential for anaerobic digestion of wastewaters (WW) at high efficiency while generating biogas as a by-product (Harb et al., 2017). One of the main challenges associated with AnMBRs is reduced efficiency at low temperatures due to decreases in both bioreactor and membrane performance which makes using AnMBRs in North America impractical as WW is temperature is typically in the range of 10 – 20°C (Environment Canada, 2017). The addition of powdered activated carbon (PAC) could be a solution to the increased fouling and low chemical…(COD) removals that occur at low temperatures as it has abrasive and adsorptive properties. There are some studies that have observed the effect of PAC on AnMBRs resulting in increased quality of permeate but none tested varying concentrations of PAC at psychrotrophic temperatures using raw WW. Hence, this was investigated in this study. Three-lab scale AnMBRS were set up in parallel and monitored for both bioreactor and membrane parameters over a two-phase experiment. Initially the membranes were operated at 10°C and 24°C to establish the performance under mesophilic and psychrophilic conditions without the presence of PAC. Then all three reactors were converted to psychrophilic conditions and three different concentrations of PAC were added to the reactors, 0.5, 1.0, and 2.0 g/L. To determine the effect of PAC on membrane performance, transmembrane pressure (TMP) and concentrations of organic sub-fractions were monitored. Bioreactor performance was evaluated by monitoring chemical oxygen demand (COD) and suspended solids (SS) in the waste activated sludge (WAS) feed and permeate. Stage 1 of the research showed that membrane fouling increased at psychrotrophic temperatures as the cycle lengths decreased from 9 days at 24°C to 3 days at 10°C. Similarly, the bioreactor performance also decreased significantly with the temperature drop, resulting in lower permeate quality. Overall, the results were consistent with literature reports. Stage 2 of the experimentation revealed that adding 1.0 g/L of PAC significantly lowered the level of SCOD in the WAS and TCOD in the permeate, resulting in a higher quality of permeate. Reduced performance with 2.0 g/L of PAC was attributed to the PAC acting as both an adsorbent (non biodegradable COD & colloidal COD) and as a scouring agent. At a low concentration (0.5 g/L) of PAC the adsorptive effect was not prominent. At the highest concentrations, PAC was adsorbing and causing significant scouring as was evident through the increase in cycle lengths. However, it appears that the increased scouring reduced biofilm formation at the membrane and thus limited biodegradation that occurred on it thereby resulting in a lower quality of permeate and higher SCOD levels. Hence adding PAC at moderate concentrations was deemed to provide the best performance.