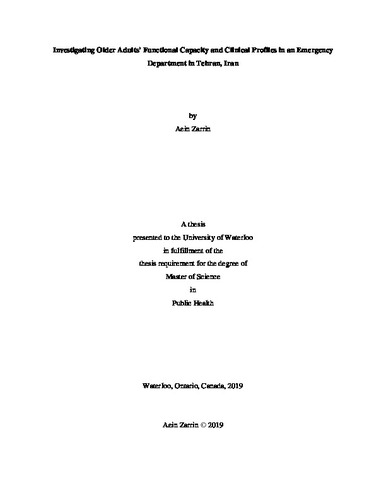 Introduction: While population aging has been investigated mostly in developed countries, developing nations are also experiencing a demographic shift. Iran is no exception. One of the sectors of healthcare that is affected substantially by population aging is acute care, particularly emergency departments [ED]. However, there is a paucity of information on the profiles of older Iranians in acute care. Therefore, this research project is aiming to investigate older adults’ functional capacity and clinical profiles in an emergency department in Iran. Methods: This project was an observational cohort study. Older ED patients at a large, public teaching hospital in Tehran were assessed using interRAI ED-CA assessment tool. Twenty-eight days following their discharge, adverse outcomes, such as re-admissions and mortality were investigated. Using confidence intervals prevalence estimate of geriatric syndromes were compared with seven other nations that participated in a previous interRAI multinational study. Further, multivariate logistic regression was utilized to identify predictors of post-discharge adverse outcomes. Results and Discussion: There was a bimodal distribution of frailty among older ED patients at Shariati Hospital. Patients were either somewhat frail, whose ED visit could have been potentially prevented through primary care, or extremely frail, indicating an immediate need for stabilization. Similar to other countries, functional decline was common from the pre-morbid to admission stage. However, the prevalence of functional deficits, potential delirium, cardiovascular diseases, and immobility was higher than many developed nations, such as Australia, Canada, and Germany. Geriatric syndromes were found as significant predictors of ED re-admissions and death. Future interventions must prioritize the implementation of primary care, senior-friendly EDs, and community support.