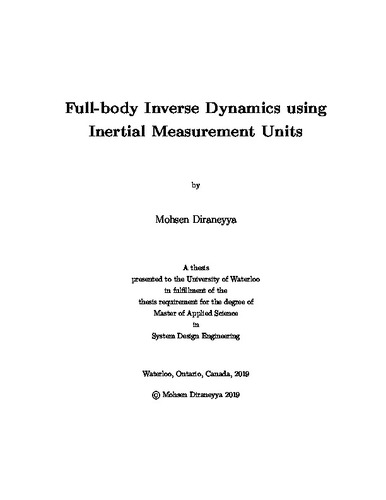 Estimating the loads on the human body is crucial in ergonomics, where it is of use in workplace design, task-load assessment, and safety limits establishment. It is also relevant to rehabilitation studies, where it can be used to design programs, activities, and instruments. Estimating these loads requires the collection of data on motion kinematics and external forces during the task or exercise of interest. Traditionally, Optical Motion Capture (OMC) systems and Force Plates (FPs) were commonly used to collect kinematic data and measure Ground Reaction Forces (GRFs). However, this experimental set-up is limited to laboratory settings and small, confined spaces. It also imposes significant instrumentation costs. The availability of wearable Inertial Measurement Units (IMUs) and better signal processing techniques have allowed for the development of effective whole body Inertial Motion Capture (IMC) systems. Inverse dynamic models that use motion kinematics collected from these systems are also being developed. A challenging aspect in this endeavor is the need to estimate GRFs from kinematics, without recourse to FPs, in order to take full advantage of the IMC systems' portability. To overcome this challenge, some models include upper body segments only and solve for joints loads using a top-down approach. Other models consider gait motions and apply a smooth transition assumption relevant only to the gait cycle. The aim of this current research is to continue along this latter line of development by introducing a general purpose full-body inverse dynamics model based on IMC kinematics. This model allows for true system portability, dispensing with the use of FPs and any other equipment confined to in-lab use. This study has developed a whole-body model that determines the net forces and moments in body joints during general motions captured using an IMC system. Further, an anatomical lower-spine model has also been used to estimate the disk contact forces in the lower back and thereby assess the critical loads on the lower back. Using inverse dynamics, the model also estimates total GRF from the kinematic data and breaks it down into right and left GRFs using an optimization approach that minimizes energy expenditure. The model predictions were validated by comparing them to values measured during an experimental pilot study. The results show an excellent prediction of the total vertical GRF, with relative Root-Mean-Square-Error (rRMSE) of less than 2.4 %. The predictions were less accurate for the horizontal components, ranging from 22.5 % to 39.4% for the anterior-posterior direction, mainly because of their smaller amplitudes. The optimization approach for predicting the right and left vertical GRFs performed well for standing and walking tasks, with rRMSE less than 13.0 %. The model was then used to analyze the forces experienced by masons during bricklaying. Static and dynamic estimates of joint loads were compared to understand how movement affects joint loads.