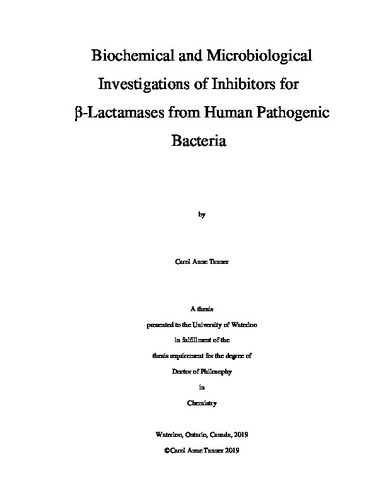 The majority of antibiotics prescribed for treatment of bacterial infections are β-lactam antibiotics. Resistance to these has evolved in a few different ways, notably by regulating permeability and by the expression of β-lactamases which hydrolyze the antibiotic before it reaches its target. Three of the classes of β-lactamases (classes A, C and D) are serine-β-lactamases (SBLs) and the fourth class (Class B) consists of metallo-β-lactamases (MBLs) that rely on one or two zinc ions for their catalytic activity. Bacteria producing β-lactamases that are capable of hydrolyzing the β-lactam bond in all of the classes of β-lactam antibiotics including penicillins, monobactams, cephalosporins and carbapenems are of great clinical concern. As a consequence of the increasing prevalence of resistance, there is much interest in the discovery of inhibitors for such clinically important β-lactamases as well as in the discovery of β-lactam antibiotics that are less susceptible to inactivation by β-lactamases. Described in this thesis are the kinetic properties of new chromogenic cephalosporin-type substrates that are susceptible to hydrolysis by clinically important SBLs and MBLs but that exhibit a much more pronounced colour change upon hydrolysis than does the commercially available and widely used chromogenic cephalosporin called nitrocefin. Some of these substrates also offer more favourable kinetic properties for assaying MBLs in vivo. Also in this thesis, biochemical as well as microbiological investigations of several classes of SBL and MBL inhibitors are describes as well as one class of cephalosporins that exhibit inhibition of MBLs and surprising antibacterial potency against certain clinically significant MBL-producing Gram negative bacteria. More specifically, 6-phosphonomethylpyridine-2-carboxylates (PMPCs) and a number of derivatives thereof, synthesized previously in this research group have been shown in this thesis research to be potent inhibitors (low to submicromolar Ki) of the major Class B1 MBLs, IMP-1, VIM-2, NDM-1 and SPM-1 as well as the Class B3 MBL L1, all of which are dizinc enzymes, and somewhat less potent inhibitors of the monozinc Class B2 MBL, SFH-1, which is of lesser clinical significance. These compounds that are expected to exhibit metal-binding characteristics were found to exhibit a time-dependent inhibition mechanism which fits a kinetic mechanism that is consistent with slow binding to the active site and even slower release of the inhibitor without expulsion of the metal ions form the MBL active site. Microbiological investigations were also carried out involving combinations of PMPCs with the carbapenem antibiotic meropenem and demonstrated an ability of the PMPCs to lower the MICs of meropenem against of MBL-producing clinical strains of Eschericia coli, Klebsiella pneumoniae, Pseudomonas aeruginosa, Acinetobacter baumannii and Stenotrophomonas maltophilia thus encouraging further research on even more potent PMPCs for potential clinical use in combination with carbapenems. Another class of MBL inhibitors that was studied consist of cephalosporin derivatives that incorporate an aromatic thioester linked to C3ʹ of the cephalosporin core. It was found that inhibition of the Class B3 MBL L1 was likely the consequence largely of the binding of an arylthioacid conjugate base to the active site zinc ions after its expulsion from the hydrolysis product of the cephalosporin. This led to a study of the MBL-inhibitory properties of a series of synthetic arylthioacids, a class of compounds that have not been well studied as metallo enzyme inhibitors. These compounds were found to be poor inhibitors of Class B1 MBLs (IMP-1, VIM-2, NDM-2 and SPM-1) but good inhibitors of the B3 MBL L1. These observations are consistent with inhibition of Class B1 MBLs arising not from the arylthicarboxylate released but from binding the cephalosporin-derived metal-binding species formed upon expulsion of the arylthiocarboylate from the active site. A further enzyme kinetic study revealed that synthetic samples of pyridine-2,6-bis(carbothioic) acid and 6-thiocarboxy-picolinic acid, previously known as Fe3+-binding siderophores produced by some species of Pseudomonas, were good inhibitors of Class B1 and B3 MBLs and also exhibited an ability to lower the MIC of meropenem against MBL-producing clinically important Gram negative bacteria. One cephalosporin called UW-123 with at C3ʹ-arylacylthio group and a siderophore mimic attached to the amide group at C7 was studied in some detail microbiologically and found to exhibit good standalone antibiotic activity against certain MBL-producing Gram-negative bacteria especially those producing the widespread MBL VIM-2. UW-123 was also shown to be bacteriostatic and to bind preferentially to induce filamentation of E. coli cells. It was found to bind most strongly to PBP 3 and 1a but also significantly to PBP1b and 4 in P. aeruginosa. In E. coli, UW-123 bound most tightly to PBP3 but also significantly to PBP1a/b and PBP2. Finally, the ability of a cyclobutanone mimic of penem antibiotics JJ05-1058, previously prepared in this laboratory, to inhibit both SBLs and MBLs was demonstrated and the ability of this compound to bind to the low molecular weight penicillin binding proteins was observed suggesting that such compound may have some promise as broad spectrum MBL/SBL inhibitors and possible also as antibiotics that inhibit penicillin binding proteins.