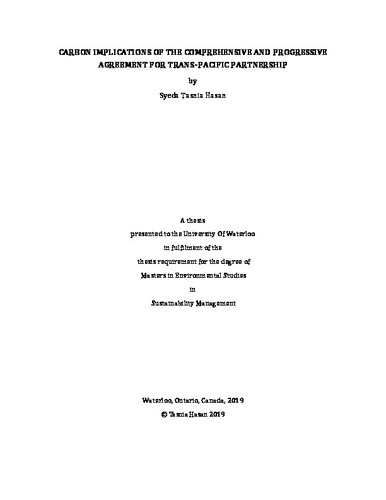 The Comprehensive and Progressive Trans-Pacific Partnership (CPTPP), formerly known as the Trans-Pacific Partnership (TPP), is the largest multilateral free-trade agreement consisting both developed and developing economies of Australia, Brunei, Canada, Chile, Japan, Malaysia, Mexico, New Zealand, Peru, Singapore and Vietnam. The trade agreement first signed in 2016, was deemed ambitious for its signatories not only because the agreement would create new markets for free-trade, but also because it included provisions addressing intellectual property rights, labor standards and the environment. After the US withdrew from the partnership in 2017, a revised version of the TPP agreement was signed by the remaining eleven member states in March 2018. The new agreement retains all thirty chapters from the previous version but suspends twenty-two of its provisions. Though the agreement (both old and new versions) goes beyond most free-trade agreements by addressing protection of ozone layer, biodiversity, wildlife trafficking etc., yet it fails to explicitly mention carbon-dioxide emissions or climate change. In its ‘Environment’ chapter, the agreement encourages member countries to “transition to a low emissions economy” and pursue goals of the various multilateral environmental agreements (MEAs) they are a part of, like the Montreal Protocol for the protection of ozone layer. The aim of the research was to assess the carbon implications of the CPTPP agreement by studying the amount of carbon dioxide embodied in trade across ten carbon-intensive sectors from 2017-2035 between member countries using the multi-region input-output (MRIO) tables. This was mainly done in two steps. At first, the consumption-based CO2 emissions were calculated with the help of emissions multiplier which was determined using MRIO analysis. Then the estimated consumption-based emissions and COP21 commitments as percentage trade share among the CPTPP member states were compared to find out the quantity of emissions needed to be reduced by these countries in order to accomplish their Paris Agreement goals. The result of the input-output analysis shows that consumption-based carbon-dioxide emissions due to trade liberalization in the region increase for all parties of the agreement. The changes in emissions when compared to the respective country’s Paris Agreement targets it is observed that CPTPP member states are unable to achieve them by 2030. This thesis also delves into the environmental provisions of the CPTPP agreement, connections and linkages between the Sustainable Development Goals (SDGs) and the nationally determined contributions for the Paris Agreement to understand the implications of rising emissions in accomplishing the COP21 commitments for each country and their sustainable development goals on climate action and partnership between countries. Analysis reveals that environmental pressure increases as a result of increased production, consumption and trade, and the effect of such an increase and the environmental provisions of the treaty have an opposing outcome on the SDG 13 and SDG 17 for the trade partners.