Renunciation and the Householder/Renouncer Relation in the New Kadampa Tradition 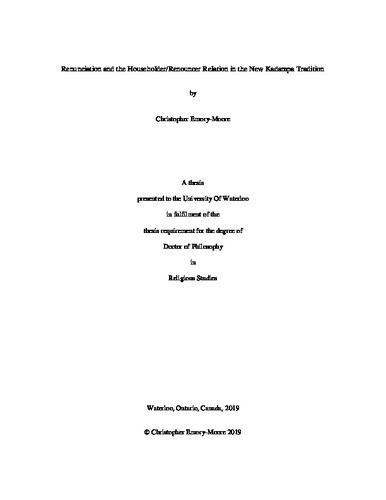 Founded by the Tibetan-British monk Geshe Kelsang Gyatso in 1991, the New Kadampa Tradition – International Kadampa Buddhist Union (NKT-IKBU) is a fast-growing and controversial transnational Buddhist network that has enthusiastically embraced an expansionist business model and major monastic reform. Toward an improved understanding of the group and of Tibetan Buddhism’s diasporic modernization more broadly, this dissertation examines the practice of Buddhism’s traditionally monastic soteriology of renunciation (the abandonment of “worldly concerns” on the path to liberation from cyclic rebirth) by members of urban NKT meditation centres in Canada and the United States. When China declared its sovereignty over the Tibetan cultural region in 1951, twenty-year old Kelsang Gyatso was one of over 6,000 monks residing at the Geluk monastery of Sera near Lhasa. Forty years later when he founded the NKT in northern England, Gyatso decided it would have no monasteries, only congregational teaching and meditation centers designed to spread his interpretation of Geluk Buddhism. Without monasteries to institutionally support the Buddhist praxis of renunciation, what does renunciation look like in the NKT? My ethnographic study of the North American NKT addresses this question by engaging field interviews, participant observations, publications, teachings, and media through a conceptual apparatus prominent in both Buddhism and Buddhist Studies: the householder/renouncer relation. I argue that the NKT’s market-driven expansionism not only supersedes its funding of a monastic community but replaces monasticism as the principal institutional framework for renunciation in the form of full-time subsistence missionary work on the part of ordained and lay Kadampa Buddhist virtuosos. Whereas Tibetan clerical renunciation looks like the monastic community’s dual abandonment of the household activities of economic and sexual production, my analysis of NKT labour reveals that these have been bifurcated between ordained Kadampa monastics who renounce sexual reproduction but not economic production, and Kadampa missionary managers who renounce the latter but not necessarily the former. Celibate monastic ordination becomes an optional lifestyle, the suitability of which is primarily a matter of personal preference rather than ritual specialization, and the arduous and austere life of a missionary (lay or ordained) becomes the principal model of a consecrated life of renunciation. Finally, I suggest that this hybrid business model of “missionary monasticism” has been a major factor in the NKT’s external growth, producing a diverse and motivated labour force whose renunciation of economic remuneration provides the organization with the fruits of their economic production, but also in some of the movement’s more visible internal fault lines: labour shortage, turnover, and disgruntled former members.