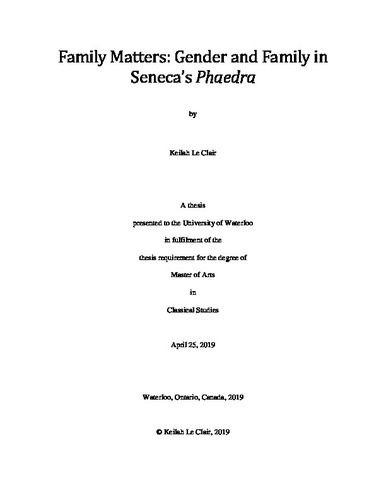 Seneca the Younger, writing in the early Roman Empire, is the only known Roman tragedian whose works survive. His Phaedra, considered to be one of his earlier tragedies, is centered on the royal family of Athens, consisting of the hero Theseus, his current wife Phaedra, and his son, Hippolytus. Each of these three main characters exhibit shifts in their portrayed gender as the play unfolds. Hippolytus, first introduced as a hunter and strong leader, becomes hunted by his stepmother Phaedra, making him the passive participant in their relationship. This passive role was considered to be the feminine role by the ancient Romans. Theseus, the Athenian hero known for slaying the Minotaur of Crete, stays within the masculine sphere, but shows the full breadth of masculinity. His role as a hero both contrasts and compliments his roles as father and husband. Theseus’ heroic identity causes him to exhibit a damaging form of hyper-masculinity; within his family, he shows a more benign masculine character. Phaedra, for her part, uses the feminine roles of virgin, wife, and mother to conceal her strong masculine traits. She is an apt hunter, choosing to die that she might continue to hunt Hippolytus in the underworld after his tragic death. Seneca, in writing this incestuous myth for a Roman audience, displays the consequences of gender subversion and the tragic effect this has on the royal family of Athens.