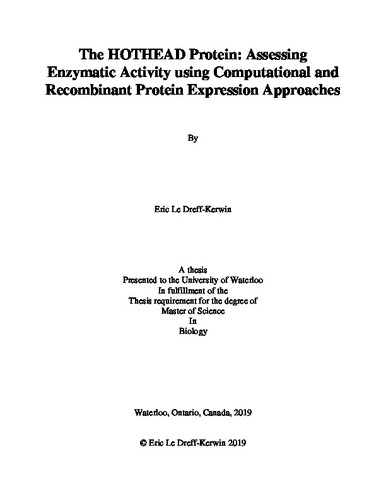 In Arabidopsis thaliana, a number of genes regulating cuticle synthesis have been identified by virtue of organ fusion phenotype. One such gene, HOTHEAD (HTH) was among those originally identified by this phenotype but its exact role in cuticle formation has proven challenging to determine. Previous bioinformatic work has identified that the HTH protein is a member of the GMC oxidoreductase family, and shares peptide sequence identity with a mandelonitrile lyase and an alcohol dehydrogenase that are within the same protein family. This thesis work investigated the potential enzymatic function of HTH by comparing a structural model to two structural analogs. The structure model of HTH, as determined in this study, shows that HTH shares certain conserved features of GMC proteins. The aim of this research also included isolating a recombinantly expressed HTH protein from Escherichia coli and initial work in Pichia pastoris. Protein isolation attempts in Escherichia coli failed to yield active HTH protein, potentially due to the lack of post-translational modifications. Continuing the work using the eukaryote, Pichia pastoris, should solve the issue. Finally, crude extracts from Arabidopsis thaliana floral tissue were obtained to test for the presence of HTH enzymatic activity but showed no significant mandelonitrile lyase enzymatic activity, potentially due to the inability to successfully extract the HTH protein from the floral tissue.