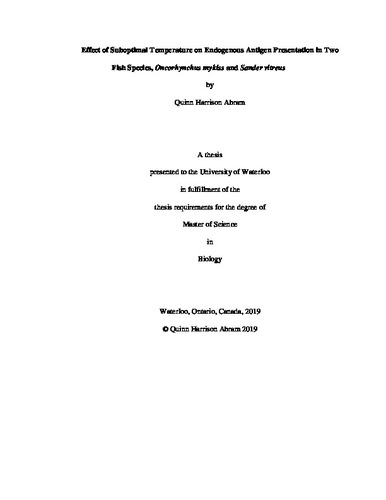 Winter months and the increasing frequency and magnitude of extreme low temperature events, occurring as a result of global climate change, subject teleosts such as rainbow trout and walleye to suboptimal temperatures, conditions that have been shown to generally impair their immune responses. Viruses provide an example of one type of pathogen that could take advantage of impairments in the host immune response at low temperatures. Most viruses produce double-stranded RNA (dsRNA) at some point in their viral life cycle, and recognition of the virally produced dsRNA results in the production of type I interferons (IFNs), cytokines that mediate the cellular antiviral response. Type I IFN signalling in mammals is involved in the regulation of the endogenous antigen presentation pathway (EAPP), an important antiviral pathway that participates in limiting the spread of infection. However, the relationship between IFN1 and the EAPP has not been fully studied in fish. Previous studies examining the effect of low temperatures on the EAPP have found varied results across teleost species, and have not examined the potential role of IFN1 in any impairment in EAPP function seen at such temperatures. In this thesis, the effect of suboptimal temperatures on the constitutive and inducible regulation of EAPP transcript levels and the role of IFN1 in regulating the EAPP were examined using the rainbow trout hypodermal fibroblast cell line RTHDF and the walleye skin fibroblast cell line WESk-11 as in vitro models, allowing for a comparison between two teleost species that diverged 206 million years ago. In contrast to previous work in the WESk-11 cell line, suboptimal temperatures did not impair constitutive regulation of the EAPP in the RTHDF cell line. Interferon-stimulated response elements (ISREs) were identified in the promoter regions of the pathway-specific members of the EAPP (b2m, mhIa, and tapasin) in rainbow trout for the first time, suggesting that IFN1 is involved in the regulation of these genes in rainbow trout as it is in mammals. As such, the observed delays in IFN1 transcript up-regulation and secretion at suboptimal temperatures following stimulation with polyinosinic-polycytidylic acid (poly(I:C)), a synthetic dsRNA molecule, in the RTHDF cell line may provide a partial explanation for the impaired inducible EAPP transcript levels that were seen at these temperatures. Inducible regulation of EAPP transcript levels was also impaired in the WESk-11 cells following stimulation with poly(I:C), and in both the rainbow trout and walleye cell lines following infection with viral haemorrhagic septicaemia virus (VHSV) IVb, albeit to a greater degree in the walleye cells in both cases. Finally, VHSV IVb replication was greater at 20°C in the WESk-11 cells than the RTHDF cells, indicating that the WESk-11 cell line is more permissive to the virus, although some replication was observed in both cell lines at 4°C. These results suggest that the impairment of EAPP regulation at the suboptimal temperature in the rainbow trout and walleye cells may be indicative of a compromised cellular antiviral response that could allow for longer-lasting viral infections. Impaired antiviral responses in teleosts at suboptimal temperature could complicate the stocking of fish for recreational fisheries and conservation purposes, and contribute to diseases loss in the aquaculture industry, issues that could be exacerbated in the face of global climate change.