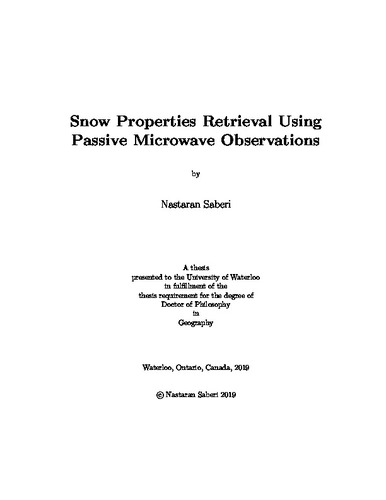 Seasonal snow cover, the second-largest component of the cryosphere, is crucial in controlling the climate system, through its important role in modifying Earth’s albedo. The temporal variability of snow extent and its physical properties in the seasonal cycle also make up a significant element to the cryospheric energy balance. Thus, seasonal snowcover should be monitored not only for its climatological impacts but also for its rolein the surface-water supply, ground-water recharge, and its insolation properties at local scales. Snowpack physical properties strongly influence the emissions from the substratum, making feasible snow property retrieval by means of the surface brightness temperature observed by passive microwave sensors. Depending on the observing spatial resolution, the time series records of daily snow coverage and a snowpacks most-critical properties such as the snow depth and snow water equivalent (SWE) could be helpful in applications ranging from modeling snow variations in a small catchment to global climatologic studies. However, the challenge of including spaceborne snow water equivalent (SWE) products in operational hydrological and hydroclimate modeling applications is very demanding with limited uptake by these systems. Various causes have been attributed to this lack of up-take but most stem from insufficient SWE accuracy. The root causes of this challenge includes the coarse spatial resolution of passive microwave (PM) observations that observe highly aggregated snowpack properties at the spaceborne scale, and inadequacies during the retrieval process that are caused by uncertainties with the forward emission modeling of snow and challenges to find robust parameterizations of the models. While the spatial resolution problem is largely in the realm of engineering design and constrained by physical restrictions, a better understanding of the whole range of retrieval methodologies can provide the clarity needed to move the thinking forward in this important field. Following a review on snow depth and SWE retrieval methods using passive microwave remote sensing observations, this research employs a forward emission model to simulate snowpacks emission and compare the results to the PM airborne observations. Airborne radiometer observations coordinated with ground-based in-situ snow measurements were acquired in the Canadian high Arctic near Eureka, NT, in April 2011. The observed brightness temperatures (Tb) at 37 GHz from typical moderate density dry snow in mid-latitudes decreases with increasing snow water equivalent (SWE) due to the volume scattering of the ground emissions by the overlying snow. At a certain point, however, as SWE increases, the emission from the snowpack offsets the scattering of the sub-nivean emission. In tundra snow, the Tb slope reversal occurs at shallower snow thicknesses. While it has been postulated that the inflection point in the seasonal time series of observed Tb V 37 GHz of tundra snow is controlled by the formation of a thick wind slab layer, the simulation of this effect has yet to be confirmed. Therefore, the Dense Media Radiative Transfer Theory forMulti Layered (DMRT-ML) snowpack is used to predict the passive microwave response from airborne observations over shallow, dense, slab-layered tundra snow. The DMRT-ML was parameterized with the in-situ snow measurements using a two-layer snowpack and run in two configurations: a depth hoar and a wind slab dominated pack. Snow depth retrieval from passive microwave observations without a-priori information is a highly underdetermined system. An accurate estimate of snow depth necessitates a-priori information of snowpack properties, such as grain size, density, physical temperature and stratigraphy, and, very importantly, a minimization of this a prior information requirement. In previous studies, a Bayesian Algorithm for Snow Water Equivalent (SWE) Estimation (BASE) have been developed, which uses the Monte Carlo Markov Chain (MCMC) method to estimate SWE for taiga and alpine snow from 4-frequency ground-based radiometer Tb. In our study, BASE is used in tundra snow for datasets of 464 footprints inthe Eureka region coupled with airborne passive microwave observations—the same fieldstudy that forward modelling was evaluated. The algorithm searches optimum posterior probability distribution of snow properties using a cost function between physically based emission simulations and Tb observations. A two-layer snowpack based on local snow cover knowledge is assumed to simulate emission using the Dense Media Radiative Transfer-Multi Layered (DMRT-ML) model. Overall, the results of this thesis reinforce the applicability of a physics-based emission model in SWE retrievals. This research highlights the necessity to consider the two-part emission characteristics of a slab-dominated tundra snowpack and suggests performing inversion in a Bayesian framework.