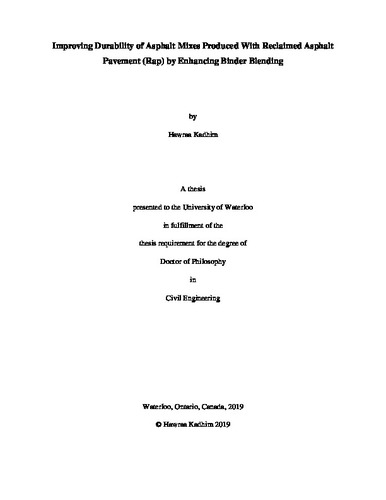 Reclaimed Asphalt Pavement (RAP) has been favoured over virgin materials in the light of the unstable cost of virgin asphalt binders, shortage of quality aggregates, and compelling need to preserve the environment and natural resources. Mixes containing up to 20% RAP are commonly considered to have similar behaviour to virgin mixes. However, during the production process of HMA with RAP, the blending between aged and virgin binders would be partial, which would create heterogeneity in distribution of the aged recycled binder and the soft virgin binder in the HMA-RAP mixes. Hence, it is important to control the blending process between old and new binders to obtain more homogenous mix. Therefore, the main objectives of this research are to examine the kinematics of blending of aged and virgin binders by considering the time-temperature effect during mixing and silo-storage, and assess the thermo-mechanical behaviour of Hot Mix Asphalt (HMA) containing RAP at different blending states. The asphalt mixes used in this research were produced and collected at two plants (Plant 1) and (Plant 2) located in Ontario, Canada. Two Marshall mixes were produced and collected from Plant 1 including a surface course HL-3 containing 15 percent RAP and a base course HL-8 containing 30 percent RAP. These mixes were labelled as 1HL-3 and 1HL-8 respectively. In addition, two Marshall mixes were produced and collected from Plant 2 including a surface course HL-3 containing 20 percent RAP and a base course HL-8 containing 40 percent RAP. These mixes were labelled as 2HL-3 and 2HL-8 respectively. To investigate the impact of storage time on the blending progress and achieving a cohesive final binder, the mix samples were collected as a function of storage time in the silo. The first sampling was done immediately after production (t = 0-hour), and then at several time intervals of silo-storage; i.e., at 1, 4, 8, and 12 hours. In case of Plant 2, the samples were additionally collected after 24-hour of storage time. All samples were then kept in a storage room at 7˚C until the day of compaction to minimize any further blending between aged and virgin binder. To understand the blending phenomena and its effect on the performance of the pavement, a multi-scale investigation is carried out. The blending was examined in terms of micro-mechanical and rheological properties. The microstructure of the blending zones were examined under The Environmental Scanning Electron Microscope (ESEM). In addition the effect of the silo-storage time on the rheology of the binders was investigated. The results indicate that increasing the interaction time and temperature between the aged and virgin binder significantly results in a better blending. The performance of RAP-HMA with respect to the silo-storage time was examined using Dynamic Modules Test, Thermal Stress Restrained Specimen Test (TSRST), Rutting Test, and Flexural Beam Fatigue Test. The experimental data indicates that samples collected after 12-hour of silo storage exhibited a reduction in the stiffness due to better blending of aged and virgin binder. In addition, the 12-hour samples showed enhancement in their fracture temperature, rutting depth, and fatigue life, accompanied with a better blending between their aged and virgin binder. On the other hand, the samples that collected after 24-hour silo-storage had a higher stiffness in comparison with the 8 and 12-hour samples. Moreover, the AASHTOWare Pavement Mechanistic-Empirical Design was utilized to examine the effect of the 12-hour silo-storage time on the long term performance of the pavements. Four pavement structures have been designed for this purpose. These pavements have the same structure of their granular A, granular B, and the subgrade. Yet, the first layer (surface course and base course) is a silo-storage time-dependent. The long-term field performance prediction indicates a slight improvement with the 12-hour pavements (Plant1 12hrs and Plant2 12hrs). However, it should be noted that AASHTOWare Pavement Mechanistic-Empirical Design does not appear to properly capture the effect of blending in the pavement performance. The collected experimental evidences unveils correlations between time-temperature effects and mixture performance. Based on these findings, the research provides practical recommendations to the professionals of the Canadian asphalt industry for a better use of RAP. Ultimately, this research recommends a 12-hour silo-storage time for the RAP-HMA for better performance and durability of the mixes