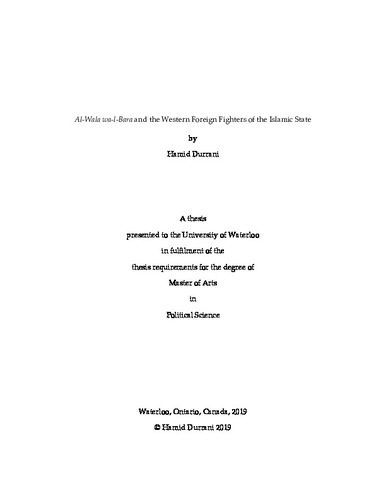 Addressing the question of the Islamic State’s foreign fighters not only necessitates a thorough understanding of their state of mind or psychology, but also the firm ideological beliefs in their hearts and minds. There are many studies that focus on the earthly pursuits of the Islamic State’s Western fighters but they tend to fall short because they do not adequately address the religious aspects. As it appears, Salafi-jihadism and Wahhabism are the central philosophies of the Islamic State’s religious roots. Heavily relying on qualitative data, this study aims to unveil whether hijrah to the Caliphate or rallying to its cause at home correlates with the Islamic State’s emphasis on the distinctly Salafi and particularly Wahhabi doctrine called al-Wala wa-l-Bara. This study first explains the historical and theological contexts of the doctrine. Second, it examines the extent to which the doctrine was preached by the Islamic State to sway Muslims to support its cause. Third, it examines the statements of some Western foreign fighters of the Caliphate to trace the significance of the doctrine. Finally, through interviews with imams & muftis, it introduces the understanding of the doctrine among Muslims living in Western society. The study reveals that the doctrine was directly introduced or quoted to Muslims living in the Western societies in thirteen of fifteen issues of Dabiq, and in eight of the twelve available issues of Rumiyah. The examined statements of the Western fighters, who fought in the Caliphate, tried to travel to the Caliphate, or raised arms at home, clearly indicated the influence of the doctrine and its importance to their decision-making process and its significance to their everyday life in the West. According to all the imams & muftis interviewed, hijrah to the Islamic State, and terrorist attacks in the West were highly driven by the teachings of al-Wala wa-l-Bara. All the interviewed participants argued that the doctrine is considered a threat, if misinterpreted or misunderstood by an individual.