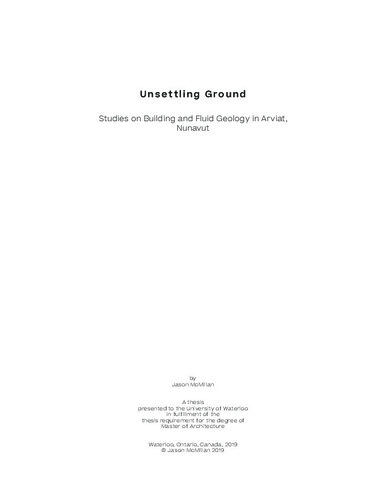 Ground in the Canadian Arctic is continuously being shaped by the dramatic seasonal cycles of the environment, extreme weather and deep geological processes of glaciation and retreat. The stability of Northern ground is particularly difficult to define on frozen soils suffering the increasing warming trends of climate change. Across the Inuit homeland of Nunavut, the remote communities have always lived with geological instability through traditional knowledge of climate and territory. However, as the North was aggressively transformed by systematic federal government interventions, including forced relocations of Inuit, housing programs and military monitoring, Canadian visions of modernism imposed new patterns of settlement and spaces on Arctic communities. Today, Inuit are re-centring and staking ownership over buildings and spaces constructed in the territory. Unsettling ground – the research and design practice of this project – refers to the questioning of colonial structures in the form of buildings and the urban plan of Arviat in southwestern Nunavut. This thesis is a response to historic and projected urban plans for the community which erase all Indigenous readings of the ground. Following two trips to the community, a series of architectural research studies examine multiple understandings of the ground, challenging imposed western conventions of mapping, masterplanning and housing that historically have shaped and neutralized development in the North. Stories and geological observations shared by community members on the ground culminate in three design schemes re-imagining current planning and design practices of the Nunavut Housing Corporation. At three scales of infrastructure, community spaces and housing types, each scheme resists the rigid structure of current community planning with strategies for flexibility and adaptability: encouraging collective construction, ownership and inhabitation of unstable ground. Each speculation is open-ended, the beginning of a community-driven plan to reclaim agency over the dynamic ground from the geological and economic strictures imposed by modern colonial architecture and planning. Unsettling Ground offers a deeper understanding of the perpetually shifting geology impacting one community, but more broadly questions the grounds of architectural practice in the North through new, respectful relationships built upon the land.