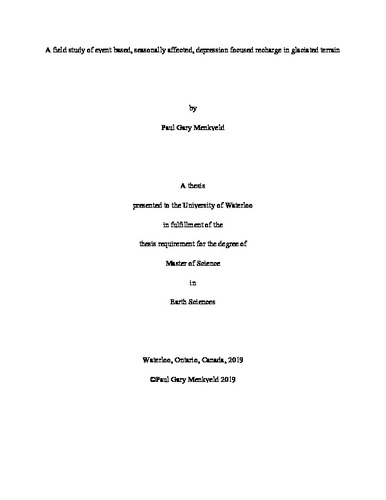 To observe the dynamics of depression focused recharge (DFR) and the effects of seasonality related to transient surface water features, a field scale experiment was designed and conducted within glacial terrain in southern Ontario. The site selected for this case study is located in Mannheim, Ontario, on a property adjacent to a public supply well and a perennial stream known as Alder Creek. The site is characterized by hummocky topography and localized closed depression features. During hydrologic events, surface runoff collects in one of the closed depressions located near Alder Creek and the public supply well forming a transient surface water feature and causing DFR. Detailed subsurface characterization was completed to support the hydrogeologic conceptual model and three vertical instrument clusters were installed to observe groundwater recharge. Vertical instrument clusters include arrays of monitoring wells, surface water pressure transducers, neutron probe access tubes, arrays of time domain reflectometry sensors, and arrays of temperature sensors, which were installed along a transect perpendicular to Alder Creek through the closed depression. The clusters were positioned adjacent to the stream, in the center of the closed depression and in agricultural land up hill of the closed depression area in order to observe recharge processes and groundwater surface water interaction in these different settings. As part of the experiment, the site was instrumented with a meteorology station, water quality samples were collected, and direct soil samples were retrieved during hydrologic events. Two major meteorological events were selected in the scope of this study: November snow melt and rainfall event in 2014 (the November Event including 80 mm of precipitation), and the spring melt and rainfall event in 2015 (the Spring Melt Event including 110 mm of precipitation). Both events were caused by a similar magnitude of combined snow melt and rainfall. The two events provide the opportunity to contrast unfrozen soil conditions during the November Event with the presence of frost (35 cm) in the shallow soils during the Spring Melt Event. The two events also contrast in intensity; the November Event lasted 1.8 days and the Spring Melt Event took place over 35 days. Observations of recharge dynamics and their implications were made during the two events. During the November Event, DFR and recharge from Alder Creek occurred rapidly, causing the water table to rise to the ground surface. During this time period, surface water was observed to infiltrate rapidly, and depending on the microbial composition of the surface waters, the recharge could potentially be carrying pathogens into the shallow aquifer. This provides a case study of the potential risk of contamination by a transient surface water feature resulting in DFR, adjacent to a public supply well. During the Spring Melt Event, seasonality affected the recharge dynamics in several ways including the temporary formation of a thin layer of ice in the surficial sediments immediately below the closed depression in frozen soils, the complex thawing of this ice layer, and a significant temporal lag between recharge related to high water levels in Alder Creek and recharge related to the closed depression feature. At the start of the Spring Melt Event, the transient ice layer reduced infiltration beneath the topographic depression such that surface water remained in the closed depression for weeks as air and ground temperatures slowly increased. During this time period, there was evidence of groundwater recharge near the stream and beneath the depression that is interpreted to be related to enhanced infiltration from Alder Creek during the spring freshet. As the shallow soil zone warmed, it thawed in small bursts allowing cold water to infiltrate, then the ice layer refroze, stopping the flow of water. The ice layer then finally thawed permitting significant infiltration and the surface water drained from the closed depression for the first time since the start of the Spring Melt Event. The ice layer had the effect of delaying recharge from the closed depression. The continuous monitoring of the subsurface instrumentation clusters along the transect permitted the identification of discrete recharge phenomena related to changes in the stream stage and infiltration of surface water within the closed depression during both of these major hydrologic events. In addition, by combining the subsurface hydrogeologic information with transient soil water data, vertical soil temperature profiles and hydraulic head data, quantitative estimates of event-based groundwater recharge were completed. During the November Event, Alder Creek contributed 0.27 m of recharge and the closed depression contributed 0.31 m of recharge, however this is an overestimate. The effect of the two simultaneous sources of recharge is that the groundwater head increases are superimposed on each other in the groundwater hydrographs and therefore the WTF method would potentially overestimate the recharge during this event and would be of limited value. During the Spring Melt Event, Alder Creek contributed 0.18 m of recharge and the closed depression contributed 0.20 m of recharge. The results indicate that significant rates of recharge can occur beneath localized features such as closed depressions and perennial streams in response to major hydrologic events such as periods of intense precipitation and spring melt. If the infiltrating water is carrying potential contaminants such as pathogens, these infiltration events may represent a short-lived, yet significant, threat to groundwater quality. This would be of highest concern at locations where this type of infiltration event occurs close to a supply well, as is the case for this study site.