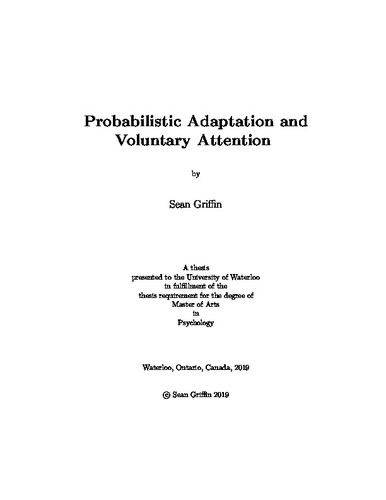 The following experiments considered the general phenomenon of behavioural adaptation in response to statistical regularities—which we refer to as probability learning (PL). In particular, these experiments focused on spatial PL and its relationship with spatial attention. Evidence suggests that the set of neural mechanisms responsible for spatial PL might intersect with those which mediate the voluntary expression of spatial attention. Furthermore, inductions of spatial PL are typically successful in the absence of explicit awareness on the behalf of participants. These findings raise the question of whether spatial PL inductions can be used to subtly alter voluntary behaviour by altering attentional biases. If this is the case, spatial PL inductions could have a wide range of applications—for example as tools in skill training and marketing. We investigated a potential cross-task influence of spatial PL on voluntarily expressed patterns of spatial attention. We used a behavioural task based on the Tse Illusion to measure voluntary shifts in spatial attention (Illusion Task; Tse, Caplovitz, & Hsieh, 2006). We used a feature discrimination task (PL Task) derived from Druker and Anderson (2010) to induce spatial PL. Experiments 1, 2, and 3 combined the Illusion Task with the PL Task in a pre-test/post-test design. Experiment 3’s inclusion of eye tracking permitted us to explore mechanistic hypotheses concerning the cross-task translation of behavioural adaptation. All three experiments revealed that condition-specific variation of the PL Task’s spatial probability distribution produced predictable changes in PL Task performance. Experiment 3 supported the utility of eye-tracking as a tool for understanding the processes underlying spatial PL along with the impact of spatial PL on voluntary attention. We found that we could reliably induce spatially-specific changes in involuntary attention. We produced consistent and robust estimates of the impact of such spatial PL on our feature discrimination task—and, found the effect to be largely driven by changes in eye-movement generation and consequently target acquisition. Finally, we discovered that spatial PL did not influence the expression of voluntary attention in a subsequent task.