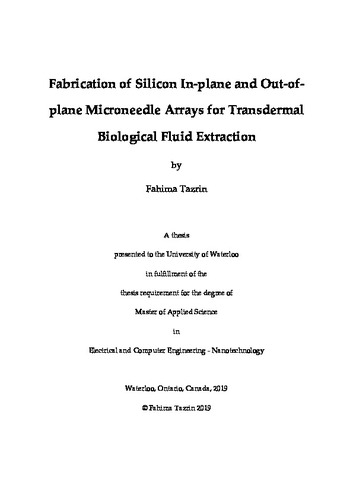 This thesis presents research in the field of microelectromechanical systems and specifically in the area of microneedle-based transdermal skin fluid extraction and drug delivery. The objective of this thesis is to highlight the potential role of microneedles in achieving painless transdermal skin biofluid extraction and drug delivery of macromolecular drugs across the skin barrier. The work represents the design and fabrication of silicon out-of-plane and in-plane microneedles and an innovative double-side Deep Reactive Ion Etching (DRIE) approach was presented for producing hollow silicon microneedle arrays for transdermal biological fluid extraction. The solid silicon out-of-plane microneedles are fabricated from a single side polished wafer whereas the hollow out-of-plane microneedles are fabricated from a double side polished wafer to a shank height of 200-300 μm with 300 μm center-tocenter spacing. The single-step Bosch DRIE is performed for “in-plane” silicon microneedles to simultaneously etch the needle shaft (parallel to silicon substrate, etch through the wafer) and the narrow trenches as open capillary fluidic channels (partly etched into the wafer), taking advantage of the aspect-ratio dependent DRIE etching. Furthermore, the double-sided two stage DRIE is performed to etch the open trenches on the backside of wafer and then the needle shaft on the front side. The in-plane needles have the advantages of making long needles up to 2 mm. Moreover, the in vivo testing results are provided as well. In this thesis, different microfabrication techniques are investigated, developed, optimized, and applied in the fabrication process. The first chapter conveys an overview of nanotechnology, nano-/microfabrication and their role in medicine. The second chapter illustrates an introduction to transdermal drug delivery and extraction. Furthermore, the fundamental background of skin structure and interstitial fluid (ISF) is introduced as well. Device fabrication tools and techniques are shown in chapter three. The fourth chapter presents a detailed literature review of microneedles in terms of its general concepts, structures, materials and integrated fluidic system. Eventually, Chapter 5 introduces the details of our method to fabricate solid and hollow silicon microneedle arrays step by step. SEM images and in vivo testing results confirm that silicon microneedle both out-of-plane and in-plane arrays are not only sharp enough to penetrate the stratum corneum but also robust enough to extract ISF out of skin or to deliver drug.