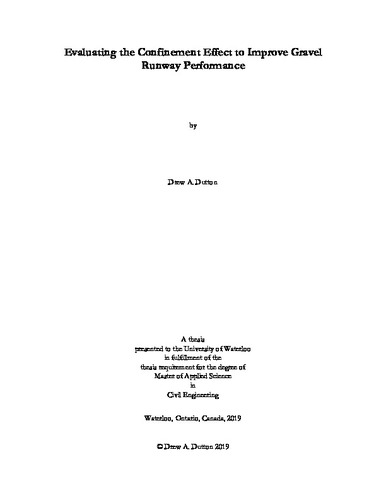 This research was intended to adapt an existing strength testing method used only in Russia for conformance with Aircraft Flight Manuals typical of North America. Bearing strength requirements are typically listed by minimum California Bearing Ratio for gravel runway operations. The Boeing Cone Penetrometer is commonly used throughout North America to verify gravel runway bearing strength. Bombardier Inc. desired operational capacity in northern Russia at airports which lacked the necessary equipment for strength verification via Boeing Cone Penetrometer. The research objective was to investigate a correlation between results reported via Boeing Cone Penetrometer and the Udarnik U-1 used in Russia. A successfully documented correlation would allow for runway bearing strength verification via the Udarnik U-1, without alteration to Aircraft Flight Manuals. Laboratory conditions allow for precise control of input parameters. Extrapolation to field conditions should be performed with caution. In controlling input parameters, such as pavement homogeneity, a trade-off ensues with other factors. In particular, the boundary conditions at field scale could be lost via the confinement effect of specimen mould walls experienced at bench scale. An investigation quantifying the confinement effect for each test method has therefore been deemed necessary, and formed the focus of this research. Three soil types were studied (sand, clay, and organic), encompassing the broad range of pavement structures which could be encountered at remote runway locations. The Response Surface Method was adapted for use in the confinement effect investigation, considering mould diameter and soil unit weight as the independent variables. The same method was applied in the correlation investigation, considering moisture content and soil unit weight as the independent variables. The method of investigation into the confinement effect shows promise. Modelling suggests that quadratic terms are significant, however further data points are required to estimate the parameter coefficients. It is recommended that axial treatment runs be performed which would allow completion of the confinement effect model. The complete confinement effect model could then be used to estimate field scale strengths based on the input parameters of bench scale testing, bridging the gap between field and lab testing. The correlation investigation encountered challenges with respect to control of moisture content in combination with control of soil unit weight. In retrospect, these parameters are highly correlated. Since soil unit weight is inversely proportional to void space, variation of soil unit weight inherently restricts moisture content. To capture the effect of moisture on pavement strength, saturation level should be considered. Replacement of moisture content with saturation level as an independent variable could yield statistically significant models which capture the effects of both density and moisture; the experiment should be repeated using these independent variables. Within limits, the correlation investigation was able to establish bearing strength models based solely on the soil unit weight as the independent variable. These models support the central region of the models developed in the confinement effect investigation. This research provides new insight into overcoming the discrepancies between bench and field testing. First steps have been taken into defining the impact of confinement effect on bench scale Boeing Cone Penetrometer and Udarnik U-1 tests. Completion of the recommended next steps would yield correlation between the two test methods. This methodology could be further applied to review correlations between various bearing strength test methods. Other remote regions internationally which experience the same California Bearing Ratio reporting challenges could be accessed in this method. Future development along these lines would serve to increase consistency of aviation regulatory standards internationally.