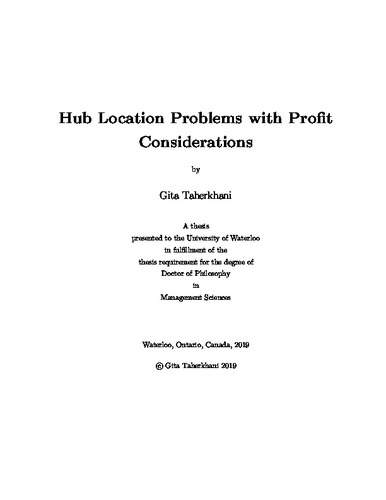 This thesis studies profit maximizing hub location problems. These problems seek to find the optimal number and locations of hubs, allocations of demand nodes to these hubs, and routes of flows through the network to serve a given set of demands between origin-destination pairs while maximizing total profit. Taking revenue into consideration, it is assumed that a portion of the demand can remain unserved when it is not profitable to be served. Potential applications of these problems arise in the design of airline passenger and freight transportation networks, truckload and less-than-truckload transportation, and express shipment and postal delivery. Firstly, mathematical formulations for different versions of profit maximizing hub location problems are developed. Alternative allocation strategies are modeled including multiple allocation, single allocation, and $r$-allocation, as well as allowing for the possibility of direct connections between non-hub nodes. Extensive computational analyses are performed to compare the resulting hub networks under different models, and also to evaluate the solution potential of the proposed models on commercial solvers with emphasis on the effect of the choice of parameters. Secondly, revenue management decisions are incorporated into the profit maximizing hub location problems by considering capacities of hubs. In this setting, the demand of commodities are segmented into different classes and there is available capacity at hubs which is to be allocated to these different demand segments. The decision maker needs to determine the proportion of each class of demand to serve between origin-destination pairs based on the profit to be obtained from satisfying this demand. A strong mixed-integer programming formulation of the problem is presented and Benders-based algorithms are proposed to optimally solve large-scale instances of the problem. A new methodology is developed to strengthen the Benders optimality cuts by decomposing the subproblem in a two-phase fashion. The algorithms are enhanced by the integration of improved variable fixing techniques. Computational results show that large-scale instances with up to 500 nodes and 750,000 commodities of different demand segments can be solved to optimality, and that the proposed algorithms generate cuts that provide significant speedups compared to using Pareto-optimal cuts. As precise information on demand may not be known in advance, demand uncertainty is then incorporated into the profit maximizing hub location problems with capacity allocation, and a two-stage stochastic program is developed. The first stage decision is the locations of hubs, while the assignment of demand nodes to hubs, optimal routes of flows, and capacity allocation decisions are made in the second stage. A Monte-Carlo simulation-based algorithm is developed that integrates a sample average approximation scheme with the proposed Benders decomposition algorithm. Novel acceleration techniques are presented to improve the convergence of the algorithm. The efficiency and robustness of the algorithm are evaluated through extensive computational experiments. Instances with up to 75 nodes and 16,875 commodities are optimally solved, which is the largest set of instances that have been solved exactly to date for any type of stochastic hub location problems. Lastly, robust-stochastic models are developed in which two different types of uncertainty including stochastic demand and uncertain revenue are simultaneously incorporated into the capacitated problem. To embed uncertain revenues into the problem, robust optimization techniques are employed and two particular cases are investigated: interval uncertainty with a max-min criterion and discrete scenarios with a min-max regret objective. Mixed integer programming formulations for each of these cases are presented and Benders-based algorithms coupled with sample average approximation scheme are developed. Inspired by the repetitive nature of sample average approximation scheme, general techniques for accelerating the algorithms are proposed and instances involving up to 75 nodes and 16,875 commodities are solved to optimality. The effects of uncertainty on optimal hub network designs are investigated and the quality of the solutions obtained from different modeling approaches are compared under various parameter settings. Computational results justify the need for embedding both sources of uncertainty in decision making to provide robust solutions.