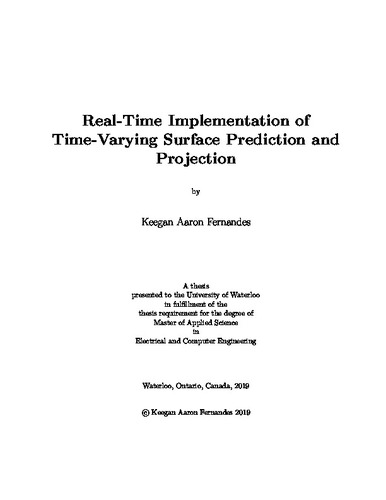 Spatial augmented reality makes use of projectors to transform an object into a display surface. However, for time-varying, non-rigid surfaces this can prove to be difficult, and often leads to image distortion. In order to avoid this highly accurate measurements of the surface are required. Traditional methods of measuring surface deformations are inadequate due to noise as well as potential sources of time delay, such as projector lag. To get more accurate results, a mass spring model can be used to simulate the dynamics of the time-varying surface. This model can be put into a nonlinear state space form to get a first order differential equation. Numerical integration techniques can then be used to solve the differential equation presented. In order to reduce uncertainty in the model generated a filtering algorithm can be used. Both, the extended Kalman filter (EKF) and the cubature Kalman filter (CKF) are evaluated as potential candidates. To be able to run these filters in real time a reduced order model is developed. This enables the use of fewer mass nodes in the model, allowing for faster compute times. Additionally, to reduce visual error, an optimal node placement algorithm is used. This ensures that the surface generated by the mass spring mesh closely matches the real, curved surface of the system, minimizing error. The EKF and CKF algorithms are implemented onto a hanging cloth system perturbed by an oscillating fan. A parameter identification technique is used to create a model that accurately represents this hanging cloth system. Additionally, noise parameters of the EKF and CKF are adjusted to compensate for modeling errors and sensor noise. Finally, The mean squared error of the EKF and CKF algorithms are compared to evaluate their effectiveness. Both algorithms provide satisfactory results for use in spatial augmented reality applications. However, in all cases tested the CKF is shown to have significantly lower error values. Although the CKF algorithm is shown to be more accurate than its EKF counterpart, its computation time is much larger. However, the computation time required is still within the threshold of being able to perform real-time estimation at up to 100Hz. Furthermore, due to the nature of the construction of the CKF, it can be applied as a multi-threaded workload to significantly reduce computation time. Therefore, the implementation of a CKF algorithm can be used to accurately estimate the positions of a measured surface for use in spatial augmented reality.