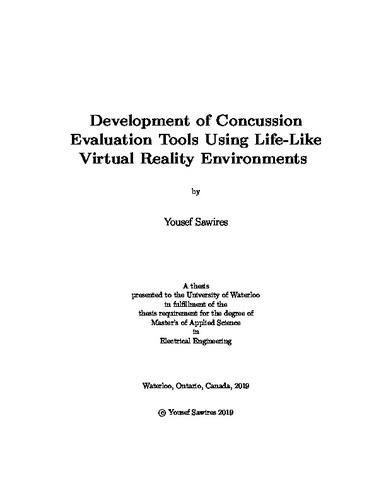 Concussions are a common type of traumatic brain injury that can have severe consequences and are often induced by sports injuries. Once concussed, patients are more likely to sustain a second concussion, as they could be returned to play before they have fully recovered, in what is known as second-impact syndrome. Repeated concussions can also lead to delayed post-traumatic brain degradation, causing dementia and movement disorders. It is important to be able to detect concussions in an accurate and timely manner to avoid severe long-term effects. Current methods of diagnosis require a knowledgeable physician to be able to identify inconspicuous symptoms such as dizziness, headaches, nausea, and imbalance. It is necessary to develop new tools that enable the diagnosis of concussions reliably and quantitatively. The researchers in this thesis propose a method to classify concussions in hockey players based on the reaction time to an external stimulus in a VR environment. Different hockey scenarios were recorded with the use of a 360 degree camera and ambisonic microphone. The scenarios involved the dual-task challenge of a puck being passed towards the camera followed by a hockey player charging towards the camera. The collected audio and video are played back to participants on an Oculus Rift head-mounted display. The participants then attempt to track the puck and avoid the charging hockey player while the VR scenario is replayed. Emg data is collected from the quadriceps femoris muscle group, minus the vastus lateralis, to measure the reaction time of the participants to the virtual collision. Motion capture data is also collected to track head directionality during the experimental procedure to gauge the spatial awareness of participants. There appear to be no observable differences between participants with a history of concussions and participants without a history of concussions. Preliminary results will be shown; however, more data collection is needed in the future to be able to classify concussions based on reaction time and motion. In the future, this work will be expanded to players who have suffered a recent concussion (< 1 month), where their reaction times and motion will also be collected throughout their recovery.