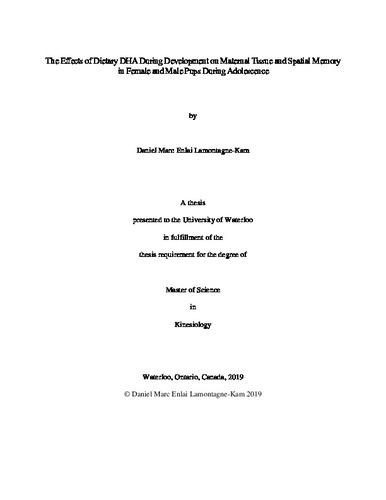 Sex differences in plasma docosahexaenoic acid (DHA) status during adulthood have been documented previously, and recent studies suggest the effects of DHA supplementation on human cognition are different in females compared with males during infancy, adolescence, and early adulthood. Differences in estradiol concentration are believed to be the predominant factor in sexual dimorphisms in DHA status when DHA is not supplemented. This suggests that sexual dimorphisms begin during adolescence when fed diets not supplemented with DHA, but this has not been examined comprehensively. Therefore, this thesis examined: 1) DHA status in rat maternal, fetal and pup tissues with and without dietary DHA supplementation during pregnancy; 2) the onset of sex differences in the fatty acid composition of plasma, heart, brain and liver from birth to adulthood in rats fed chow diets; and 3) the impact of DHA supplementation during the perinatal period on spatial memory in female and male adolescent pups, and possible relationships to brain lipidomic profiles. Results from these studies show that maternal DHA status decreased significantly during the postpartum period when DHA was not provided in the diet and suggest that DHA could be mobilized from maternal adipose and possibly maternal heart and liver for milk production. Furthermore, results show that sex differences in tissue polyunsaturated fatty acids (PUFA) began at 6 weeks of age. In the spatial memory experiment, DHA supplementation significantly increased latency times during the final learning session of Morris Water Maze (MWM) testing and reduced arachidonic acid (ARA) and n-6 docosapentaenoic acid (DPA) containing phospholipid species in the hippocampus of both males and females. Understanding the effects of DHA supplementation during the perinatal and adolescent periods on the PUFA composition of maternal and pup tissues, and how these effects interact with sexual dimorphisms is critical to understanding dietary requirements of DHA throughout pregnancy and childhood. Additionally, MWM testing and lipidomic analyses indicate that DHA supplementation may interact with long chain n-6 PUFA metabolism that may be important for spatial memory.

Daniel Lamontagne-Kam (2019). The Effects of Dietary DHA During Development on Maternal Tissue and Spatial Memory in Female and Male Pups During Adolescence. UWSpace. http://hdl.handle.net/10012/14546