Health warnings, cannabis marketing and perceptions among youth and young adults in Canada. 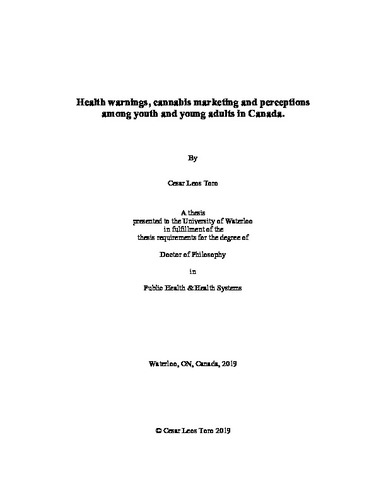 Background An increasing number of jurisdictions are legalizing nonmedical cannabis, including Canada in October 2018. One of the primary goals under the Cannabis Act is to adequately inform Canadians about nonmedical cannabis and risks related to its use. There is a need for evidence to inform regulatory measures that are implemented as part of the legal market. Purpose The current study had four specific objectives: 1) to examine current health beliefs and perceptions among young Canadian nonmedical cannabis users and non-users, 2) to examine differences in perceived effectiveness of text and pictorial health warning labels, 3) to investigate effective approaches for labelling cannabis product constituents and dose, and 4) to examine the effect of different branding elements and descriptors on product perception among young Canadians. Methods An online cross-sectional survey was conducted from October 10th to October 24th, 2017. The sample (N=870) was restricted to individuals aged 16 to 30 years of age with a Canadian IP address, and included cannabis users and non-users. The survey assessed sociodemographic characteristics, cannabis use behaviours, health knowledge, as well as attitudes and beliefs around cannabis use. Study 1 examined young Canadians’ awareness of negative health effects, as well as perceptions of risk and harm. The survey also contained three sets of between-group experiments. In Study 2, respondents were randomized to view health warnings according to one of two experimental conditions: text-only warnings, and pictorial warnings accompanied by text. Study 2 examined the effectiveness of health warnings for cannabis products and levels of support among youth. In Study 3, between-group experiments were conducted to assess comprehension of cannabis-related information, including communication of dose and strength of a particular product. Finally, Study 4 investigated perceptions of brand imagery on cannabis packaging. In this experimental set, respondents were randomized to view and evaluate cannabis product mock-ups in terms of appeal, and different perceptions of the intended target consumer. Results Study 1 Most respondents were aware of a cannabis-related physical health effect (78.0%). Approximately one-third reported having been exposed to public health messaging about cannabis; digital media was reported most frequently. Compared to never users, ever users were less likely to report that they perceive cannabis as addictive (p<0.001), and to perceive harm to mental health (p<0.001). Approximately one-quarter of past 3-month cannabis users reported they were at least ‘a little’ addicted. Respondents who reported using a particular form of cannabis self-administration (e.g., edibles, smokables, etc.) were less likely to perceive harm from that form compared to non-users (p<0.001). Study 2 Pictorial health warnings for cannabis products were perceived as more effective and believable than text-only warnings (p<0.001). Pictorial warnings were rated as more effective than text-only warnings for THC dose (p=0.039), co-morbid drug use (p=0.006), and pregnancy (p<0.001). Pictorial warnings were also rated as more believable than text-only warnings (p=0.048). Overall, 87.7% respondents supported health warnings on cannabis products and 84.0% supported the inclusion of calls to action such as quit-lines on cannabis products. Study 3 Labelling the number of doses per package was associated with the greatest proportion of correct responses (54.1%) when respondents had to determine a recommended serving compared with the no-label control condition (RR=7.28, 95%CI 4.81-11.04) and THC mg condition (RR=4.05, 95%CI 2.96-5.54). When product was labelled using a traffic light system, participants were more likely to identify THC level: low THC (RR=43.43 95%, CI 16.43-114.79) or high THC (RR=16.71, 95%CI 9.61-29.07) than the control condition. Study 4 When cannabis product branding was present, respondents were more likely (p=0.027) to report greater appeal than when branding was absent. When a pictorial health warning was present, respondents were less likely (p=0.010) to report greater appeal than when absent. The presence of a celebrity sponsor (p<0.001), music references (p<0.001), or party references (p<0.001) increased the likelihood that respondents would perceive the product to be targeted at someone younger and one that was likely to go out and party (p<0.001). Differences by cannabis use status were seen across experimental tasks; those that had ever used were more likely to find the presence of branding elements appealing. Conclusions Young Canadians report a wide range of beliefs about the health effects of cannabis use. Substantial proportions underestimated and overestimated cannabis’ health effects. The findings also suggest that cannabis users may be demonstrating a form of ‘optimism’ bias: worry about health effects and perceptions of addiction appeared to be lower when they were personalized to users rather than asked in the general form. The current study provided the first empirical test of cannabis health warnings. Pictorial health warnings for cannabis products were perceived as more effective and believable than text-only warnings. Labelling cannabis package content in terms of doses per package and using symbols or other graphics to denote potency were considerably more effective than the use of THC percentages or milligrams in making decisions about cannabis products’ recommended use amounts and potency. Finally, the findings demonstrate that brand imagery on cannabis packaging can promote lifestyle associations and influence the appeal of cannabis products among young people. There is an urgent need for additional research on regulatory approaches and strategizing public health communications campaigns to ensure that consumers have adequate information to make responsible decisions about their nonmedical cannabis use.