“In Works of Hands or of the Wits of Men”: The Elegies of Wim Wenders, Laurie Anderson and Alexander Sokurov 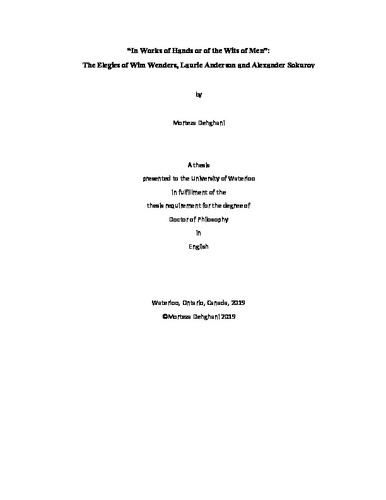 This dissertation explores the concept of loss and the possibility of consolation in Wim Wenders’s The Salt of the Earth, Laurie Anderson’s Heart of a Dog and Alexander Sokurov’s Oriental Elegy through a method that inter-reads the films with poetic elegies. Schiller’s classic German elegy “Der Spaziergang” (“The Walk”) and Rainer Maria Rilke’s Duino Elegies have been used in examining The Salt of the Earth and a late Hölderlin poem “In lieblicher Bläue” (“In Lovely Blue”) is utilised in perusing Oriental Elegy. In Heart of a Dog, Rilke’s “Schwarze Katze” (“Black Cat”) and Derek Walcott’s “Oddjob, a Bull Terrier,” among others, shed light on the working of the elegiac. I have put these films in a conversation with poems to investigate how a filmic elegy can be informed by poetic elegies and how the two arts operate similarly while they are governed by varied sets of rules. While most studies on loss are informed by psychoanalytical theories, I have focused on the formal ways in which these films portray loss and consolation, using one art, poetry, as a guiding framework to illuminate the other art, film. I propose that in The Salt of the Earth, the movement of the elegiac benefits from Deleuzian montage as the film strides towards solace manifested in resuscitation of Amazonian forests and the art of photography. The technical montage and the thematic elegiac converge. Heart of a Dog, however, bases such a motion of elegy on the Buddhist concept of Bardo, where the narrator “decreates” and then re-creates her self through the remedy of love. Finally, Oriental Elegy operates within an apophatic discourse, proposing metaphor and poetic thinking as potential yet transitory sources of consolation. While these films grieve different object of loss, ranging from humans, animals, lands, and even abstract, philosophical concepts such as the meaning of life and happiness, and whereas they introduce various remedies such as art, love, and metaphor, they function similarly formalistically. Taking its cue from Diana Fuss who revisits Freudian melancholia and benefitting from the idea that correlates loss and creativity or “figuration” as observed in Julia Kristeva and Peter Sacks, this dissertation shows how the grieving subjects are positioned in an in-between status which allows them to move forward in the face of loss. This in-betweenness, I have proposed, is manifested in an elliptical structure in the films. In their passage from sorrow, the bemoaning subjects resort to small sources of solace, loci amoeni, signified by different formal and technical elements in the films. Once analysed cinematically and placed in a dialogue with poetic elegies, the Epilogue brings all the films in one place, examining them in relation to Robert Hass’s poem “Meditation at Lagunitas.” Inter-reading the films with this poetic elegy reveals that the musing speaker in the poem and the narrators in the films face loss similarly. What defines loss is the distance between the subjects and their loved lost ones or things, a lacuna that cannot be filled and, hence, the bewailing subjects resort to a kataphatic expression, to naming, which is repetitive, open-ended, and elliptical.