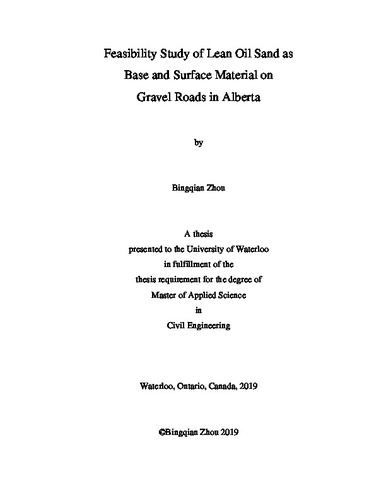 A major concern has been raised by Imperial Oil Inc. that dust issues extensively occurred on the gravel roads in Kearl Lake Oil Sand site in northern Alberta, Canada. Some mitigation measures had been utilized to minimize the dust. Preliminary results showed that the dust has been well controlled by applying Lean Oil Sand (LOS)-granular mixtures. A site survey has been conducted by the Centre for Pavement and Transportation Technology (CPATT) at University of Waterloo and Imperial Oil Inc. to assess the conditions of selected gravel roads at Kearl Lake site. Recommendations on road maintenance have been provided based on the findings through visual inspection, discussions with site personnel, and physical testing at the site. The effectiveness of preliminary application of LOS on the gravel roads at Kearl Lake site prompted further research on the feasibility of applying LOS as surface or base material in gravel road design. A suite of laboratory tests, including moisture content test, extraction test, gradation test, proctor test and California bearing ratio test, have been designed and conducted at CPATT to evaluate the mechanical properties of LOS-granular mixture samples with three different mixing ratios. The results show that the bitumen content of LOS provided by Imperial was found in a range of 3-4.5% by weight which can be defined as low graded oil sand. The pure LOS and the 30% granular and 70% LOS mixture are only suitable for sub-base materials. The granular material used on site, 50% granular and 50% LOS mixture, and 70% granular and 30% LOS mixture are applicable for both base and sub-base materials. However, none of these materials are suitable for surfacing material due to lack of fine aggregates. The CBR values of the granular-LOS mixtures are mainly dependent on the granular percentage. Higher granular content generally results in a higher CBR value. Pavement structural thickness design analysis has been performed considering the introduction of LOS. The AASHTO design chart method is converted into an equation-based method using digitization and regression analyses. A parametric study showed that for gravel roads that require high performance, LOS can be used as a binding agent and mixed with granular materials for mitigating the dust effect. A low mixing percentage of LOS such as the 70% granular and 30% LOS mixture should be used in this case to maintain the strength of base layer. For gravel roads which require a relatively lower performance, a higher amount of LOS may be applied into the mixture with granular materials. In this situation, the introduction of LOS can both save the cost of granular materials and mitigate the dust effect.

Bingqian Zhou (2019). Feasibility Study of Lean Oil Sand as Base and Surface Material on Gravel Roads in Alberta. UWSpace. http://hdl.handle.net/10012/14536