An Investigation of Non-stationary Nature of Environmental Data 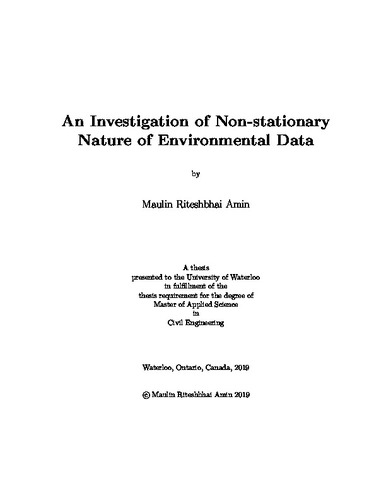 Several investigations have shown that the Earth's climate is experiencing change, as evident by rising global temperatures, receding ice sheets and reducing glacier sizes. There is also empirical observation supporting changes in patterns of precipitation, high wind events and snow fall as the climate change effects become more pronounced. IPCC has outlined various emission scenarios under which the mean global temperature can increase from 2 to 8 degrees C, which is expected to have a significant impact on the social well-being of human population on the planet. Structures are designed to withstand environment generated loads, such as high wind, snow, rain, ice and flood, over the design life of the structure. Currently, structural design codes assume that such environmental loads are stationary over the entire life of the structure ranging from 50 to 100 years. Since the assumption of stationary climate may not be tenable in future, researchers are taking in interest in modelling of non-stationary effects in environmental date for developing appropriate design load calculation methods. The main objective of this thesis is to investigate probabilistic methods for modelling the non-stationary nature of environmental data and estimating design values, i.e., upper percentiles of extreme value distribution. The thesis focuses on non-stationary version of two commonly used methods, namely, annual maxima method and the peak over threshold (POT) method. The annual maxima method uses a non-stationary Gumbel distribution with time dependent parameters. The other more general model is based on stochastic process theory in which the arrival of events and the event magnitude are treated as probabilistic variables. The arrival process is modelled as the non-homogeneous Poisson process. The proposed approach is a generalization of currently used POT method which relies on asymptotic extreme value theory. Statistical test are applied to evaluate the presence of non-stationary effects. The proposed approaches are illustrated by analysing the time series of daily maximum wind speed data from a selected set of stations. For the 10 weather stations analysed, the data analysis show that wind speed is decreasing at an average of 0.006625 KMPH annually over the 80 year period duration from 2020 to 2100.