Gaits and Their Development in the Infraorder Pecora 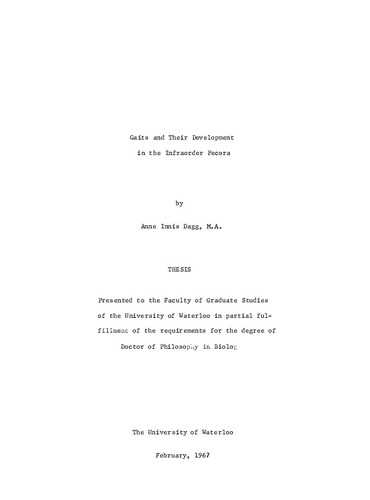 The gaits of twenty-eight species of the Infraorder Pecora are analyzed from motion picture sequences comprising over 45,000 frames. For each gait the percentage time spent on the various supporting legs during each stride and the order in which the combinations of supporting legs were used are tabulated. When possible the times for the strides are calculated. The walk patterns of each of the four families studied are shown to be statistically distinctive. Within each family, those members that live where the vegetation is so dense that they must rely on hearing to warn them of danger use a more stable walk than those species that inhabit open grasslands. A stable walk is that in which diagonal legs are used in preference to lateral legs and three or four supporting legs are used rather than two. With a more stable walk, a species is able to pause quickly and to flee instantly if danger threatens. The data for these species suggest that the antelopes, giraffids and pronghorns evolved in an open environment while the cervids, including the caribou, evolved in a woodland habitat. The variability in the walking strides of members of these species is assessed for the first time. The walk pattern varies with the nature of the terrain and with the speed at which the walk is executed. It also depends upon the age of an individual of a species and on the weight of its antlers or horns. A trotting gait is shown to be the predominant one of the constantly moving caribou. This species has evolved anatomically in ways that ensure an effective trot. The preferred fast gait of several other species is found to be a trot rather than a gallop, owing to their large size, their wooded environment, the swampy nature of the ground underfoot or their heavy antlers or horns. The type of gallop of the Pecoran species is shown to be closely related to their environment and to their anatomy. Light Pecoran species use both flexed and extended suspensions in their fast gallops. The white-tail and the mule deer alone use the extended suspension primarily, since it is in this phase of their gallop that they leap over the bushes and logs that occur throughout their brush environment. Heavy Pecoran species do not use extended suspensions, nor generally do those animals with backs sloping downward posteriorly to relatively short hind legs. A symmetrical bound is shown to be used by both cervids and antelopes either to navigate steep and rough slopes or to increase the field of vision. The times taken for walking, trotting and galloping strides are shown to be longer in larger animals. The reason for this is discussed in terms of the leg considered as a pendulum.