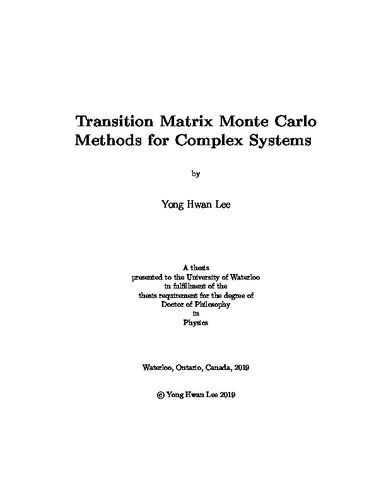 The aim of this thesis is to develop efficient transition matrix Monte Carlo simulation methods for complex systems(e.g., spin glasses) that enable one to construct the transition matrix from which the density of states is calculated with high accuracy. In this thesis, I explore a series of the transition matrix Monte Carlo techniques that are newly developed to generate the density of states with high accuracy for various systems that exhibit phase transitions. The Ising model and the Potts model are used to demonstrate the performance of each methods. Especially, the specific heat curve of the two-dimensional Ising model is evaluated and compared to the exact result as a stringent accuracy test in many cases. I extend the \emph{monovariate} multicanonical transition matrix Monte Carlo method to a \emph{bivariate} version for the calculation of the joint density of states which depends on the energy and a second variable associated with the order parameter. This bivariate version is applied to the Edward-Anderson spin glass model which is one of the most challenging model in the field of computer simulation. After presenting the theoretical basis of the transition matrix Monte Carlo method, I explain the regulated temperature method which populates the transition matrix by the Metropolis algorithm with continuously varying temperature according to a certain schedule. I introduce new techniques that can produce the optimized temperature schedule in the context of the two-dimensional Ising model. Next I proceed to present the multicanonical transition matrix Monte Carlo method in which the transition matrix is constructed through the multicanonical iteration procedure. Although this method itself is faster than other existing techniques such as the broad histogram method and Wang-Landau algorithm, its simulation speed can be further increased by the renormalization idea which utilizes the simulation results for a small system to obtain an accurate initial estimate of the density of states for a large system through the convolution procedures. Especially a novel procedure about how to apply the renormalization idea in multiple dimensions is presented. To study the critical behavior of the spin glasses, to my knowledge for the first time, I employ the \emph{bivariate} multicanonical sampling to construct the transition tensor from which the joint density of states can be calculated with high accuracy. I introduce a calculation technique that transforms the massive transition tensor to a normal transition matrix to avoid the cumbersome manipulation of tensors. Using the joint density of states, Landau free energies, the probability distribution functions of spin overlap and Binder parameters are calculated. Contrary to the majority of the previous reports in the literature, the results of my method provide evidences that nonzero temperature phase transition occurs in the two-dimensional Ising spin glass. For the $\pm J$ Ising spin glass, the critical temperature obtained by my method is $T_c/J \approx 0.45$ However, a definite conclusion can not be made due to small systems sizes and the limitted number of samples of random couplings.