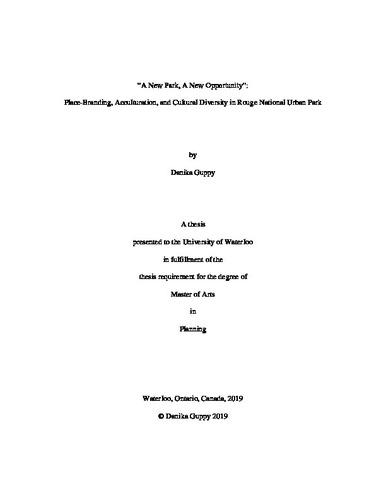 In 2015, the Rouge National Urban Park Act formally established the ‘newest member to the Parks Canada family’ in the form of Canada’s first-ever national urban park. Located in the eastern end of Toronto, the largest and most culturally diverse metropolitan area in Canada, Rouge National Urban Park represents an unprecedented opportunity to engage with audiences that are traditionally underrepresented in national park spaces, including immigrant populations. This thesis explores this new engagement potential and evaluates whether and how the Parks Canada brand is reaching and resonating with visitors to Rouge National Urban Park, particularly among those individuals who identify as immigrants to Canada. It considers whether and how this new opportunity to engage with Parks Canada’s protected landscapes through Rouge National Urban Park has impacted their perceptions of the Canadian identity. These questions are particularly relevant considering Canada’s increasing diversity, and the fact that there has been relatively little existing exploration of park use among culturally diverse clientele within a Canadian context. These questions also offer the potential to investigate certain unexplored areas in the literature, including the existence of a link between place-branding and acculturation among immigrants to Canada. The findings draw from 81 surveys and interviews completed on-site with visitors to Rouge National Urban Park. They reveal an abundance of place-meanings associated both with the park and with the Parks Canada brand in general. All respondents, including a vast majority of foreign-born participants, agree or strongly agree that the landscapes protected by Parks Canada are directly linked to a national Canadian identity, and that experiencing nature is a strong aspect of what it means to be Canadian. The findings also confirm that one’s socio-demographic background greatly contributes to the ways in which visitors use and relate to national park spaces. For instance, foreign-born visitors seem more likely to associate identity-based meanings with the park, such as comments that describe a connection between the park and their country of origin. These findings speak to the importance of marketing Parks Canada’s ‘nationally significant’ landscapes in a way that is inclusive to all audiences. Given the growing diversity of the Canadian population, it has never been timelier to ensure that all audiences are able to see themselves reflected in the spirit and presentation of Canada’s national parks.