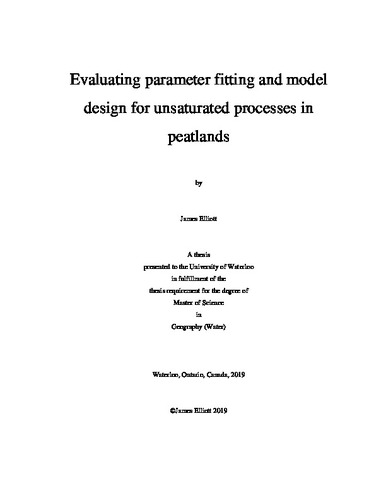 Growing Sphagnum moss for peatland restoration and fibre farming requires the proper moisture regime be maintained; thus, there is a desire to optimize growth by creating ideal hydrological conditions. Sphagnum mosses have no roots, as such they rely on passive water migration through the pore network of the unsaturated zone created by the overlapping branches. Water supply and availability is dictated by the relationship between soil water content (θ), pressure (ψ) and hydraulic conductivity (K). Hydrological modeling of the unsaturated zone is a technique for evaluating different management strategies. However, it is uncertain which parameterization method is most suitable for field scale processes and which soil water retention model (approach) is the most acceptable to use. Parameterizations of the van Genuchten – Mualem (VGM) equation were done using RETC, curve fitting to steady state laboratory (SSL) experiments; and Hydrus-1D, inverse simulation to transient field (TF) experiments, with observations from steady state laboratory (SSL) and transient field (TF) experiments, respectively. The acceptability of each parameterization was tested by comparing soil moisture estimates based on forward simulations to observed soil moisture in two regenerated moss profiles, established in 1970 and 2006. The TF model simulated soil moisture well, and had an RMSE of 0.05 and 0.06 for 1970 and 2006, respectively. The most error occurred during the wettest and driest periods of the simulation. Simulated soil moisture was consistently drier than the observed soil moisture, in the SSL simulation, and had markedly higher RMSE, 0.14 and 0.27 for the 1970 and 2006 profiles, respectively. The estimate of the VGM α parameter, an approximation of the inverse of the air-entry pressure, in the SSL parameterization was an order of magnitude higher than that of the TF parameterization. A sensitivity analysis revealed that α was the most sensitive parameter. The TF parameterization method was more appropriate for characterizing the retention curve than the SSL method, as such, it was used to characterize different approaches: hysteresis and dual porosity. By using an approach that can represent hysteresis, model performance was improved during the wet and dry periods of the forward simulation (RMSE = 0.02). Using an approach that included hysteresis was only more successful when it was implemented with a scaling equation that prevented the pumping effect. The dual porosity approach (RMSE = 0.05) performed better than the VGM approach (RMSE 0.06) for the 2006 profile, but both approaches performed similarly for the 1970 profile (RMSE 0.05). The dual porosity approach may have been more effective in the 2006 profile because of the varied assemblage of moss species present, whereas the 1970 profile was a monoculture. The parameters estimated in this study are appropriate for modeling managed or industrial peatlands where the water table is maintained near the surface; where the simulated soil moisture is expected to be within the calibrated range.