Investigating the Impact of 5′-Methylthioadenosine Accumulation in Arabidopsis thaliana 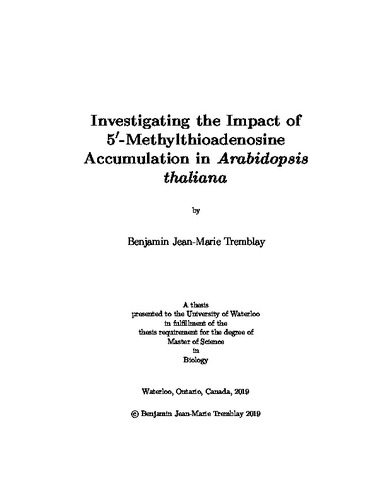 Some reactions which use the activated form of methionine (Met), S-adenosylmethionine (SAM), as a substrate produce the by-product methylthioadenosine (MTA). In the plant Arabidopsis thaliana (Arabidopsis), these reactions include the biosynthesis of nicotianamine (NA), 1-aminocyclopropane-1-carboxylic acid (ACC; the precursor to ethylene), spermidine (Spd), spermine (Spm), and thermospermine (Tspm). MTA is recycled back to Met in the Met salvage cycle. MTA is converted to methylthioribose (MTR) by MTA nucleosidase (MTN) which is encoded for by two genes, MTN1 (AT4G38800) and MTN2 (AT4G34840). The Met salvage cycle is not essential for Arabidopsis grown in sulfur-sufficient conditions. Despite this, the accumulation of MTA is very toxic. The double mutant mtn1-1mtn2-1 (which has 14.9% residual MTN activity) has a severe pleiotropic phenotype including altered vasculature, delayed bolting, fasciation, interveinal chlorosis, and both male and female sterility. Amazingly, fertility can be restored to mtn1-1mtn2-1 plants transgenerationally by feeding Spd for two weeks at the seedling stage. This restored fertility is sparse in the first generation, and increases over subsequent generations. An understanding of the underlying physiological impacts of MTA accumulation and Spd restoration was sought by studying the metabolite profile and transcriptome of un- opened buds from wild-type (WT), mtn1-1mtn2-1 and a later generation of Spd-restored mtn1-1mtn2-1 (generation 3, or G3). The mtn1-1mtn2-1 mutant accumulates over ten-times WT levels of MTA in unopened buds, making this an ideal system for the study of the impacts of MTA accumulation. These findings confirmed previous research suggesting that NA biosynthesis is very sensitive to feedback inhibition by MTA. It was also revealed that MTA accumulation in mtn1-1mtn2-1 unopened buds is accompanied with reduced sulfur assimilation through cysteine (Cys), which results in decreased Met and SAM. Furthermore, these observations hint at changes in the epigenome of mtn1-1mtn2-1 plants, which may be partially reversed in G3. Single mutant mtn1-1 grow a short root when exposed to high concentrations of MTA exogenously. This phenotype was exploited to perform a suppressor screen and several putative mtar (MTA RESISTANT) mutants were discovered. A mapping-by- sequencing approach suggests the suppressor mutant mtar2 has a non-synonymous amino acid substitution in Nitrile Specifier Protein 1 (NSP1; AT3G16400). NSP1 drives the formation of the auxin pre-cursor indole-3-acetonitrile from indole glucosinolates (GLS). This finding implicates reduced auxin biosynthesis as a the key factor in suppressing the short root phenotype of mtn1-1 seedlings fed high concentrations of exogenous MTA. The results presented in this thesis come together to build a model which attempts to explain the effects of MTA accumulation. In this model, MTA diverts sulfur assimilation away from Cys and Met towards GLS biosynthesis, and excess GLS leads to increased auxin biosynthesis.