“Your Sons and Daughters Shall Prophesy”: Visions, Apocalypticism, and Gender in Strasbourg, 1522-1539 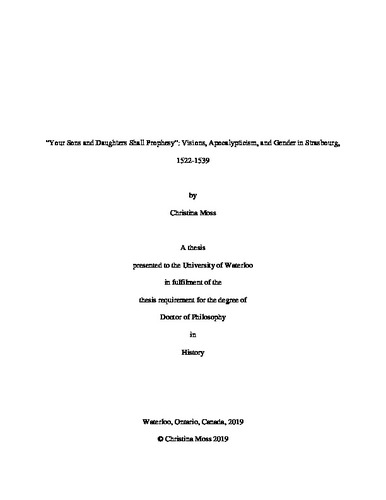 This study examines the life and work of Lienhard and Ursula Jost, two peasant religious visionaries active in Strasbourg between 1522 and 1539, in the midst of the religious turmoil of the early Reformation. The Josts were illiterate, but, through their association with the Anabaptist preacher Melchior Hoffman, they were able to reach an audience not only in Strasbourg, but also in the Low Countries. Hoffman produced two editions of the Josts’ visions and prophecies: one printed in Strasbourg in 1530, which contained only Ursula’s visions, and one printed in Deventer in 1532, which included the prophecies of Lienhard and a second, expanded edition of Ursula’s visions. The Josts’ visions and prophecies provide a rare opportunity to hear the beliefs, concerns, and ideas for reform advanced by illiterate early modern peasants and recorded by a sympathetic—rather than a hostile—scribe. This dissertation uses these sources to analyze the lives and prophetic careers of the Josts both before and after their encounter with Hoffman, the late medieval religious milieu in Strasbourg that gave rise to them, their interactions with Strasbourg’s religious and political authorities in the first decades of the Reformation, their relationship to early modern apocalypticism, and the gendered and class-based dimensions of their lives and thought. This study finds that the non-textual forms of late medieval spirituality that were prevalent in Strasbourg deeply shaped the Josts—though they were not necessarily conscious of this impact. Their visions and prophecies contain themes and ideas also present in works of religious art in the Strasbourg Cathedral and in sermons by the renowned Strasbourg preacher Johann Geiler von Kaysersberg (1445-1510). The Josts also displayed an affinity for aspects of Protestant thought, and Lienhard, in particular, hoped to cultivate the city’s reformers and magistrates as allies, though he was ultimately unsuccessful in this task. The strongest current that ran through the Josts’ writings, however, was their distress at the oppression of the poor—with whom they identified personally—and their apocalyptic conviction that they were on the cusp of a new era, in which God would finally right the wrongs the powerful had inflicted on the vulnerable for so long.