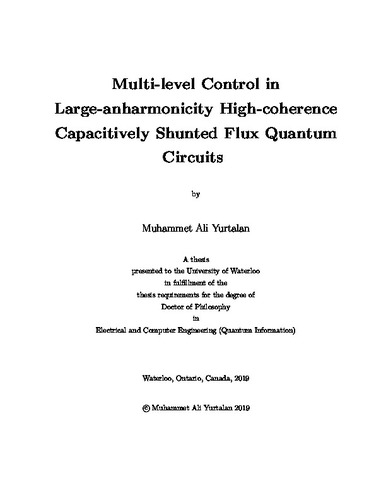 Superconducting devices as quantum bits (qubits) are one of the most promising candidates for implementing a practical quantum computer. Over the last decade, quantum coherence times of superconducting qubits have been continuously improved. Operating qubits in noise insensitive points, eliminating the participation of the lossy materials, and better isolation from environment increased the decoherence times from nanoseconds to tens of microseconds. One recent approach on the qubit design is to shunt the Josephson junctions with large capacitors to reduce the sensitivity to noise and to redistribute the stored electromagnetic energy in a well-engineered area. This approach was first applied on charge qubits and later adopted to other types of superconducting qubits. In this thesis, we present the design and the characterization of a three-Josephson junction superconducting circuit with three large shunt capacitors. We present experiments on decoherence in the circuit used as a qubit. The qubit relaxation time T₁ is reaching as high as 47 μs and the spin-echo dephasing time T₂ = 9.4 μs. In addition, we present spectroscopy experiments and decoherence characterization in the qutrit subspace formed by the lowest three energy levels. The spectroscopy data is in excellent agreement with the complete circuit model based on the system capacitance matrix. At the flux symmetry point, the circuit has a large anharmonicity, defined as the difference between the 1-2 and 0-1 transition frequencies, approaching 2π × 3.7 GHz, which is enabling fast single qubit operations. We performed randomized benchmarking with the qubit gates with a duration of 1.62 ns and an average gate fidelity of 99.9%. Moreover, we present experiments with multi-level control in qutrit subspace, formed by the lowest three energy levels. We demonstrate a single step experimental implementation of a generalized Walsh-Hadamard gate. We use a decomposition of the quantum gate into two unitary operations, one implemented by an off-diagonal Hamiltonian and the other implemented by a diagonal Hamiltonian. The off-diagonal Hamiltonian is obtained by the simultaneous driving of the transitions between levels 0-1, 1-2, and 0-2, with the latter being a two-photon process. The diagonal Hamiltonian is effectively implemented by appropriately shifting the phases of adjacent pulses. The gate is characterized using tomography process and the average fidelity exceeds 90%, in good agreement with numerical simulations that take into account the multi-level structure of the system.