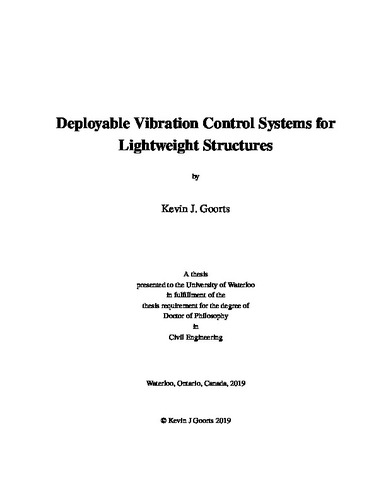 The recent push towards lightweight, efficient, and innovative structural designs has brought forth a range of vibration control issues related to implementation, effectiveness, and control system design that are not fully addressed by existing strategies. In many cases, these structures are capable of withstanding day-to-day loads and only experience excessive vibrations during predictable peak-loading events such as large crowds or wind storms. At the same time, the use of lightweight material coupled with innovative construction methods has given rise to temporary structures which are designed to facilitate rapid implementation and intended for short-term applications. Both scenarios point towards a vibration control system that is suitable for immediate, short-term applications which motivates the concept of deployable autonomous control systems (DACSs). The deployability aspect implies the control system is capable of being readily implemented on a range of structures with only minor customization to the structure or device while the autonomy aspect refers to the ability of the system to react to changes in the dynamic response and effectively control different structural modes of vibration. A prototype device, consisting of an electromagnetic mass damper (EMD) mounted on an unmanned ground vehicle (UGV) equipped with vision sensors and on-board computational hardware, is developed to study the vibration control performance and demonstrate the advantages of the DACS concept. Both numerical and experimental modelling techniques are used to identify system models for each component of the prototype device. Given the system models, the dynamic interaction between the device and underlying structure is derived theoretically and validated experimentally. The use of an EMD and UGV introduce a number of practical challenges associated with controller design. These challenges arise due to the presence of physical operating constraints as well as uncertainty in the controller model. Three different candidate controllers, based on linear-quadratic Gaussian (LQG), model-predictive control (MPC), and robust H-infinity control theory, are formulated for the prototype device and comparatively assessed with respect to their ability to address these challenges. The MPC framework provides a systematic approach to incorporate physical operating constraints directly in the control formulation while robust synthesis of an H-infinity controller is well suited for addressing uncertainty in both the controller and structure models. A key property of the prototype device is the ability to reposition itself at different locations on the structure. To study the impact of this mobility on the overall control performance, a simultaneous localization and mapping (SLAM) solution is implemented for bridge structures. The SLAM solution generates a map of the structure that can later be used for autonomous navigation of the prototype device. In achieving autonomous mobility, the location of the control force can be added as an additional parameter in the controller formulation. The overall performance of the prototype device is evaluated through a combination of numerical simulations and experimental studies. Real-time hybrid simulation (RTHS) is used extensively to study the dynamic interaction effects and evaluate the control performance of the prototype device on various structures. A full-scale modular aluminum pedestrian bridge is used to demonstrate autonomous navigation and assess the advantages of a mobile control device. The results from each study point towards DACSs as being a favourable alternative to existing control systems for immediate, short-term vibration control applications.