Organic matter decomposition at a constructed fen in the Athabasca Oil Sands Region in Alberta, Canada 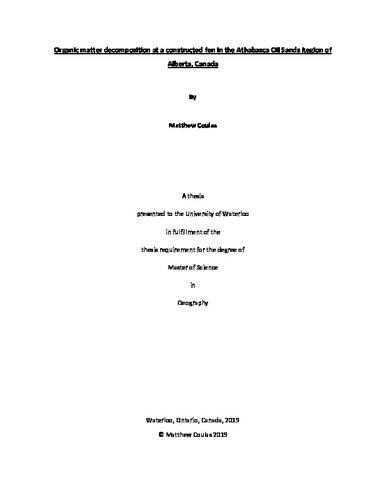 Resource mining and extraction in northern Alberta has resulted in substantial disturbances across a variety of ecosystems, including fen peatlands. Provincial regulations require companies to reclaim disturbed areas to their pre-existing function, with fen reclamation only being attempted in recent years. Fen peatlands store tremendous amounts of carbon (C) due to organic matter accumulation exceeding decomposition. Due to the length of time required for the development of these landscapes it is imperative to identify potential opportunities to minimize decomposition, thereby maximizing peat accumulation. To meet this objective, sufficient understanding of the biogeochemical and environmental controls of organic matter (OM) degradation is a priority. This research estimates decomposition rate using the litter bag method and tea bag index at a constructed fen (Nikanotee fen) in the Athabasca Oil Sands Region (AOSR) near Fort McMurray, Alberta. Throughout the growing season in 2017, environmental conditions including volumetric water content (VWC), electrical conductivity (EC), pH, and soil temperature were measured to determine controls on decomposition. Additionally, soil and water samples were collected to determine biogeochemical controls on decomposition, namely phenolic compound concentration and extracellular enzyme activities. Laboratory incubations under oxic and anoxic conditions were also used to determine microbial respiration rates under varying treatments of peat, Carex aquatilis, Juncus balticus, straw, and wood-strand mulch, which (with the exception of straw) were all utilized in the construction of the Nikanotee fen. Mixed results were obtained from these two studies. Our field study suggests that Carex aquatilis biomass decomposes faster than Juncus balticus, and that decomposition is higher under plots planted with Carex aquatilis as opposed to Juncus balticus or left bare. Furthermore, we did not observe increased concentration of phenolics as a result of the wood-strand mulch, nor did we observe any significant evidence to support the enzymatic latch hypothesis at the constructed fen. Although we observed an inhibitory effect of phenolics on OM-degrading hydrolase enzymes at the reference sites, it was not observed at the constructed fen, nor was there a significant correlation between phenol oxidase (PO) activity and decomposition rate. Lastly, we found increased decomposition under higher pH, higher soil temperature, lower VWC and lower EC. Contrary to our field study, our laboratory findings suggest Juncus balticus may be of higher lability relative to the other treatments including Carex aquatilis. We also observed negative priming rates under oxic conditions from treatments containing Juncus balticus, while positive priming effects under anoxic conditions were observed from the Carex aquatilis treatments, which could significantly impact long-term C sequestration. Similar to the findings from our field study, our results from our laboratory incubation do not support the enzymatic latch theory. Phenolics were not readily leached from the wood-strand mulch, and we observed a negative interaction between PO activity and microbial respiration. Despite this, wood-strand mulch remains preferable over straw during fen reclamation due to its reduced lability and potential negative priming effect under anoxic conditions; however, if not required for successful vegetation establishment, wood-strand mulch is not a recommend amendment as it has little effect on decomposition rates.