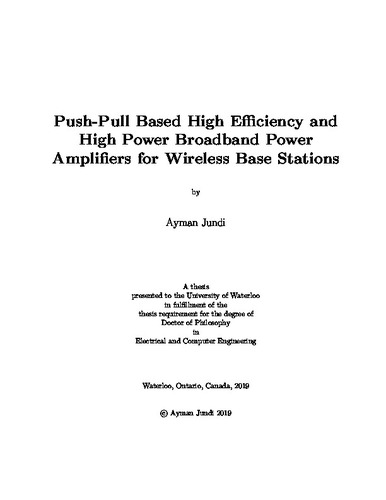 The monthly data throughput by 2021 is forecasted to be ten times that of December 2015. As a result of the on going dramatic increase in demand, service providers are assigned new frequency bands to accommodate more channels to carry more data. However, the usable part of the spectrum is a limited resource so modern communication signals were designed to be more spectrally efficient to send more bits over the same channel bandwidth. However, these spectrally efficient signals have high PAPR. The immediate reaction to these changes was to add additional RF front-end branches to accommodate the new frequency bands. Initially, the PAs used at the time were not optimized for back-off efficiency and where operating at low efficiency which caused significant increase in heat generation for the same average power produced which in turn increased cooling costs and reduced the life time of the PA. After the introduction of back-off efficiency enhancement techniques the PAs became more efficient however they were limited in bandwidth which is typically 10-15%. This work focuses on reducing the redundancy of power amplifiers in communication base stations while maintaining high back-off efficiency. After exploring the literature to understand the limitations of current implementations, it was found that the push-pull topology is often used at low frequency in broadband high power PAs. In the absence of a complimentary transistor pairs the push-pull implantation requires the use of balanced to unbalanced (balun) transformers. Various balun implantations were hence investigated to identify the most suitable option for broadband planar implementation. As a result, a methodology was proposed to co-design the balun and the matching network in order to have better control over the harmonic impedance. An 85 W push-pull PA was then designed based on the proposed methodology with a multi-octave bandwidth as a demonstration of the broadband potential of push-pull PAs at RF frequencies. Next, the two most popular techniques for back-off efficiency enhancement, i.e., ET and load modulation, were studied and the principle of load modulation was found to be more suitable for broadband signal transmission. The Doherty architecture is the most common implementation of load modulation and it comes in two basic variations, the PCL and SCL DPAs. The original architecture concepts are not only band limited but also ill-suited for high frequency designs where the transistors' parasitics introduce significant effect. However, later literature expanded on the original concept of the PCL variation which provided the needed flexibility for wider bandwidth implementations at a higher frequency. Using the broadband implementation and the co-design methodology two push-pull amplifiers were used in a PCL DPA topology and demonstrated that the push-pull utilization doesn't have a significant impact on the bandwidth of the output combiner as an octave bandwidth was achieved with the use of digital Doherty. Lastly, the thesis proposes a new approach for designing high power DPAs with extended bandwidth. It starts with a generic SCL DPA architecture to derive the equations that relate its underlying combiner's ABCD parameters to the transistor's optimum impedance and load impedance. These equations featured the possibility of significantly increasing the load impedance in SCL DPA compared to the one of the popular PCL DPA architecture. This is particularly beneficial when targeting very high power DPAs for macro-cell base stations and broadcast applications where very low load impedance can seriously complicate the design and limit the achievable bandwidth. To further maximize the load impedance increase, the proposed SCL DPA uses a push-pull topology for the main and peaking amplifier stages. A low-loss planar balanced to unbalanced transformer (balun) combiner network is then utilized to realize the SCL DPA combining. The proposed approach was finally applied to design a proof-of-concept 350 W SCL DPA which operates over the band spanning from 720 to 980 MHz. The prototype demonstrated a peak output power of about 55 dBm over a 30% FBW with a 6 dB back-off efficiency, measured using pulsed signal, between 46.6% and 54.6%. Furthermore, the modulated signal based measurement results confirmed the linearizability of the SCL DPA prototype while maintaining a back-off efficiency over 50% for a 7.1 dB peak to average power ratio signal.