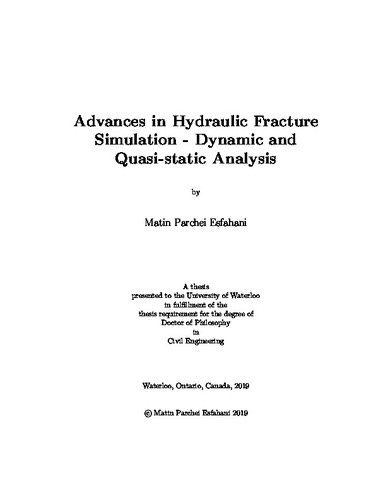 Hydraulic fracturing (HF) is an effective technique for permeability enhancement of conventional and unconventional reservoirs. HF is performed by injecting a fluid (usually water-based), sand, and chemicals into a formation under high pressure in order to induce damage and improve the interconnectivity of the fracture network through reopening of natural fractures and generation of new fractures. Hydraulic fracturing is a complex multi-physics process that involves the coupling of several physical phenomena, such as rock deformation, fluid flow, fracture propagation, etc. The simulation of HF is complex due to its coupled multi-physics nature. Despite recent advancements in HF simulations, relatively little attention has been given to improving the coupling algorithms used in these simulations. In many cases, sequential coupling algorithms are preferred over the monolithic approach due to the availability of independent solvers for each subproblem (e.g., independent deformable solid and fluid flow models), and the costliness of the monolithic approach. However, the available sequential algorithms widely used in the simulation of hydraulic fractures are known to lack robustness and encounter stability and/or convergence issues. The unavailability of efficient and effective sequential algorithms for the simulation of hydraulic fractures is currently one of the major gaps in the literature. The majority of hydraulic fracture models use quasi-static analysis, which neglects the inertial effects that are important when injection rates are very high or vary quickly in time, as during stimulation by pressure pulsing. The application of the dynamic models currently available in the literature is mainly limited to the dynamic simulations of acoustic wave emissions in porous media. Very few studies, until now, have considered dynamic simulation of fluid driven fractures. Hence, the unavailability of reliable dynamic hydraulic fracture models is another major gap in the hydraulic fracture literature. This thesis has three objectives. The first objective is to develop a stable sequential coupling algorithm for enforcing the hydro-mechanical coupling in the simulation of hydraulic fractures. The focus of the first objective is on the sequential algorithms that solve the mechanics subproblem first, in each iteration. This objective is realized in Chapter 2 of the thesis. The split is derived using the analogy of the undrained split in poromechanics; hence the new algorithm is named the \emph{undrained HF split}. The undrained HF split converges to the solution of the fully coupled (monolithic) approach. It's also shown to be stable and convergent in applications in which the conventional coupling strategies fail to converge due to oscillations. The convergence of the undrained HF split is generally slower than the fully coupled model. The second objective of the thesis is to develop a stable sequential coupling algorithm that solves the fluid flow subproblem first, in each iteration. This objective is addressed in Chapter 3 of the thesis. This algorithm is derived using the analogy of the fixed stress split in poromechanics and, therefore, named the \emph{fixed stress HF split}. The fixed stress HF split is stable and shown to converge to the solution of the fully coupled model. The algorithm is shown to successfully simulate nonplanar hydraulic fracture trajectories in flow rate controlled hydraulic fracture simulations. The third objective of the thesis is to develop a dynamic hydraulic fracture model for investigating the effect of rapidly changing loads, such as those caused by pressure pulses, on the dynamic propagation of hydraulic fractures. Chapter 4 of the thesis addresses this objective. A dynamic HF model with leak-off is developed in Chapter 4. The dynamic HF model is used to study wellbore stimulation by high rate and high amplitude pressure pulses and investigate the effect of formation porosity and permeability on the dynamic response of the system. It is observed that generally, formations with higher porosity and permeability generate shorter and wider hydraulic fractures. The dynamic response of hydraulic fractures is found to contain a phase lag with respect to the applied pressure pulse, which slightly increases with an increase in the porosity and permeability of the formation. Fracture closure mechanism is directly affected by the rate of fluid leak-off from hydraulic fractures, which also depends on the porosity and permeability of the formation. Unique acoustic wave emission patterns are observed from the response of hydraulic fracture and wellbore system to the pressure pulse at each stage of the stimulation.