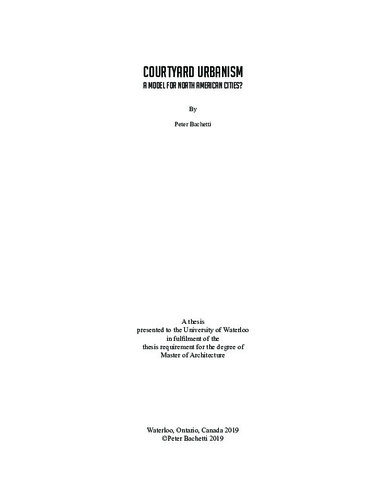 The courtyard has endured as one of the most widespread architectural forms, transcending regional, historical and cultural boundaries to mediate open and closed, inside and outside, social constraints and environmental requirements. What role can the courtyard play in today’s dense urban setting? Historically the courtyard was the center of domestic life, production and activity for the family. As domestic priorities changed within the industrial setting of a North American city, the courtyard lost its value. The courtyard therefore has struggled to be realized as an effective building typology in North America. While the courtyard has historically been used for high density low rise housing, such as the Cerda block in Barcelona, building construction, such as in contemporary Toronto, is dominated by high-rise high density building typology. As Toronto’s population increases the city is seeing an influx of high-rise condo development. 55,616 units were built between 2009-2013. Meaning 79% of all residential units completed in this time were condos. The problem becomes that the rapid urbanization of these high rise towers increases density and overloads resources to the point where infrastructure cannot keep up. Through city initiatives such as the “Avenue and Mid Rise Study,” the city of Toronto has tried to establish a mid rise building typology to accommodate a gradual transition of density and allow infrastructure to catch up. In parallel, these high rise condo towers fail to incorporate public green spaces which has reduced the number of green space per person down to 12m². With the increase in density over the coming years, and no new parks being added to the downtown core, this number will start to diminish. This thesis aims to create a framework to test Europe’s courtyard typological attributes against Toronto’s main street development strategy in order to balance green space and density for future development. Toronto’s main street frontage serves as a formal generator for the courtyard type and acts as a system of organization for a typological study matrix showing possible design outcomes within a volumetric framework. Through the application of parametric methodology using GIS ( Geographic Information Systems) across Toronto to assemble sites suitable for development, three site types are considered as the references for the building variations. Providing a new approach to a traditional urban design problem of accommodating future growth in the city.