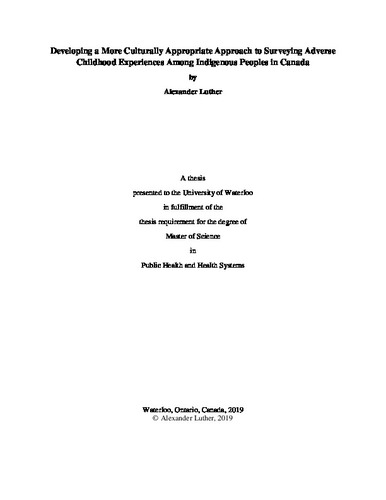 Introduction: Adverse childhood experiences (ACE) are (in a dose-dependent manner) associated with both health-risk behaviours and the development of chronic disease, and thus pose a significant threat to health and well-being. However, current ACE survey methods fail to adequately capture the adversities that some social, or ethnic groups have experienced. In particular, very few investigations have studied ACE among Indigenous populations, and those that have tended to focus on the prevalence of ACE, not on the appropriateness, or precision of the tools used for its measurement. The study was an attempt to answer two primary research objectives. The first was to investigate whether Indigenous people living in Canada would endorse domains of adverse childhood experiences not currently captured by the conventional ACE survey instrument. The second was to understand the factors or sources of resiliency and healthy coping strategies in regard to reducing the effects of childhood adversities and traumas among Indigenous people. Methods: Qualitative interview and focus group methodologies were utilized and adapted to integrate aspects of the nominal group technique (NGT) and of First Nations Sharing Circles. A total of 16 participants were recruited for the study (focus group n=4, interviews n=12). Thematic analysis was applied to the qualitative data generated from the interviews and focus group, and quantitative descriptions of the data generated through the NGT process were used to compare within group differences based on demographic characteristics. Results: Study findings highlighted five domains of ACE, each with numerous subthemes, relevant to Indigenous children living in Canada, including exposure to historical trauma, a lack of infrastructure and basic public services, household and community dysfunction, gender-based adversities, and racial discrimination. Although there were some similarities in the themes and subthemes in comparison to conventional ACE domains, many experiences shared were not currently captured by conventional ACE surveys. Additionally, four domains of healthy coping mechanisms and/or resiliency factors with many subthemes were identified, including healing from trauma, improving cultural connections, strong social networks, and a bevy of personal attributes. Conclusions: When undertaking such investigations an appreciation for the sociological and historical factors in many Indigenous communities and families, regardless of direct personal exposure, is required. Investigating exposure to additional adversities, such as historical traumas, a lack of public infrastructure and services, and events of racial discrimination is necessary to include when surveying ACE among Indigenous children as well. This is in addition to the conventional domains captured by ACE surveys, including sexual assault, gender-based violence, and household dysfunction items. Program planning, and resources should be directed to service providers that can offer Indigenous-based counselling, cultural programming, networking opportunities, and skill development for Indigenous people with exposure to ACE to further build healthy coping mechanisms and greater resiliency. Study findings point to the need for shift in approach to acknowledge and address the socioecological and historical factors in the health, social, and legal service sectors that engage with Indigenous individuals or communities with ACE exposure. Further investigation is necessary into other potentially relevant domains of adversity, as well as testing of an expanded ACE survey measure among different Indigenous communities or groups.