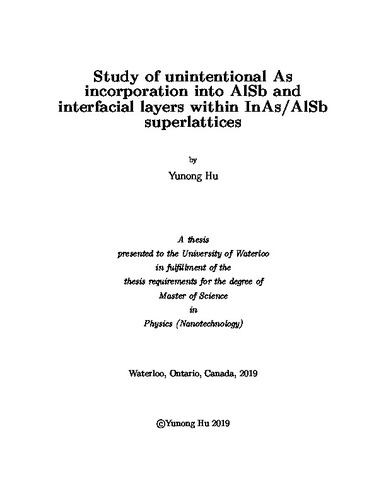 Highly strained interfaces may exist between indium arsenide (InAs) and aluminum antimonide (AlSb) layers grown by Molecular Beam Epitaxy (MBE). The composition and thickness of the interfacial layers strongly influence the electronic properties of InAs/AlSb based structures. In this work, the influence of As flux interruption procedure on the unintentional incorporation of As into AlSb layers is studied, by altering the As cracker valve settings. This effect can significantly alter the strain distribution in AlSb barrier by changing it into AlAsySb1−y layer. Several mock growths are conducted to determine the As flux temporal dependence using a beam flux monitor (BFM) at wafer position. When the As beam was interrupted, instead of abrupt flux drop, exponential decay was observed. Excellent fits were obtained using double exponent function. Three InAs/AlSb superlattice samples, varied by As valve open, As valve at 20% of growth flux, and As valve fully closed, are grown and scanned by high-resolution x-ray diffraction (HRXRD). By applying the curve fitting results into the x-ray diffraction simulations, XRD data is well fitted. The influence of As valve setting is proven to be important for interfacial strain generation. A considerable amount of As is incorporated into AlSb layers even when the As shutter is closed for As interruption during the barrier growth, and forms AlAsySb1−y instead of pure AlSb layer. The composition y may decay exponentially down to some fixed amount within the projected AlSb layers. However, whether the As composition within AlAsySb1−y layers drops exponentially or abruptly still remains as a question. Moreover, instead of an ideal monolayer of (AlAs)0.5(InSb)0.5, one monolayer of (AlAs)x(InSb)1−x with more As than Sb may exist at the InAs/AlSb interface.