Step into the Void: A Study of Spatial Perception in Virtual Reality 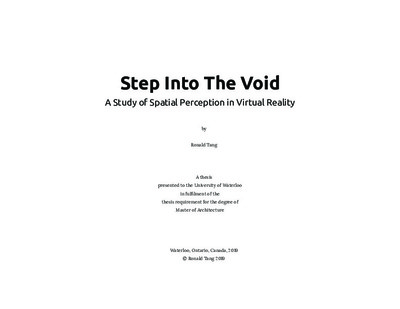 The introduction of virtual reality (VR) into the architectural profession offers an unprecedented opportunity to experience unbuilt designs at full scale. The premise of the technology is that it gives users the illusion of being in another place by replacing their field of vision with a digital image. While VR technology, for the most part, can only simulate visual sensations at this point in its development, it has demonstrated in various applications that the immersiveness of the medium can elicit visceral reactions. This potential could be leveraged to expand the capacity of architects to convey the complexities of architectural space in an easily comprehensible form. Because VR is relatively unfamiliar, especially in architecture, there is a need to identify the technology’s strengths and weaknesses so that it can be appropriately utilized in practice. The goal of this thesis is to further the understanding of interior spatial perception in VR. Perception of interior space is affected by many visual factors, like the shape of the space, details, and how crowded the space is. In order to test the impact of these aspects of spatial perception in VR, a set of experiments were conducted at the School of Architecture. Participants engaged in a series of exercises where they would attempt to position the walls and ceilings of a series of rooms to match a given set of dimensions. Each room is designed slightly differently to test the aforementioned aspects of spatial perception. These exercises are completed once with orthogonal architectural drawings and once with VR. Some results from the experiments might indicate that atmospheric design elements may be more impactful when represented in VR, but further research is required. In most cases, participants were more accurate when using orthogonal drawings to complete the exercises. However, participants created rooms that were more similar to each other when completing the exercises in VR, which suggests that VR might be more effective than orthogonal drawings in imparting a common understanding of space to different people, an encouraging sign that VR is an effective medium for communication.