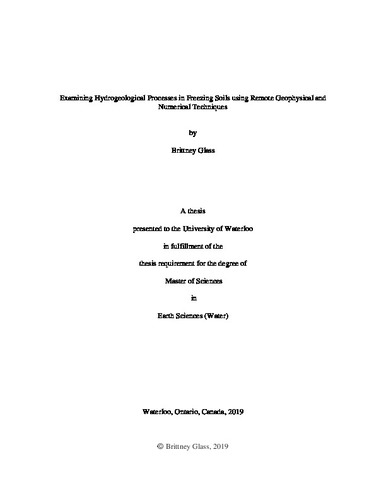 The work presented in this thesis aimed to demonstrate the use of remote geophysical methods and numerical modelling to address questions related to hydrogeological processes in freezing soils. Two different study areas and research questions were investigated: In chapter 1, Landsat 4-5 TM and RapidEye-3 datasets were used to identify groundwater discharge zones in the Central Mackenzie Valley of the Northwest Territories. Given that this area is undergoing active shale oil exploration, identification of groundwater discharge zones is of great importance. Discharge zones represent groundwater-surface water interaction points that are potential pathways for contaminants associated with hydraulic fracturing to move. Following the works of Morse and Wolfe (2015), a series of image algorithms were applied to imagery for the entire Central Mackenzie Valley, and for the Bogg Creek Watershed (a sub watershed of the CMV) for selected years between 2004 and 2017. The algorithm series extracted ‘icings’ from the images. Icings (also called aufeis) are surface ice lenses where groundwater discharges in the winter months, then freezes. Icings were statistically examined for all of the selected years to determine whether a significant difference in their occurrence and size existed. It was concluded that there was a significant difference in the spatial distribution of icings from year to year, but that there were several places where icings were recurring. During a field visit in August of 2018, high resolution thermal imagery was captured for several of these locations and it was found that groundwater was also discharging in the summer. This provides strong evidence to suggest that the recurring icings represent springs from which groundwater discharges year-round. These springs represent ideal locations to monitor the quality of discharging groundwater following the establishment of fracking operations. Furthermore, identifying these monitoring points remotely is expected to have drastically reduced the field efforts that would have been required to find them in situ. This thesis demonstrates the value of remote geophysical methods for hydrogeological applications, particularly in areas that have limited accessibility. The second component of this thesis establishes a conceptual model that describes the processes which influence winter subsurface pipe and water main breakage in Southern Ontario. Recent winters in this region have seen a dramatic increase in the number of pipe/main breaks that occur above the regional water table, but below the freezing front. Though subsurface pipe breakage is well-understood in saturated conditions or in the case when it is encompassed within the freezing zone, it is not well understood in the conditions of unsaturated soil which is not frozen, but contains a frozen zone above it. It is hypothesized that differential stress may be exerted on a pipe as soils of different frost heaving potential freeze and expand above the pipe. Once a certain overburden pressure is exceeded and upward frost heaving is no longer possible, it is expected that subsequent freezing will exert force onto the soil skeleton (and therefore pipe) below it. Two specific conceptual problems are developed in this work, and the processes which affect the distribution of stress in each case are described in detail. Then, a plan for the numerical implementation of each problem using the finite element model ABAQUS is given. Though the numerical models are not shown in this work, the conceptual models provide the framework which is necessary to implement a successful numerical model. The problem of pipe breakage in the unsaturated zone is complex and requires the coupling of equations which describe groundwater flow, stress-strain in a porous medium, and heat transport. Therefore, it was vital for an in-depth conceptual understanding of the problem to be established before introducing the numerical application.