The Squaring of the Circle: The Body According to Vitruvius – not daVinci 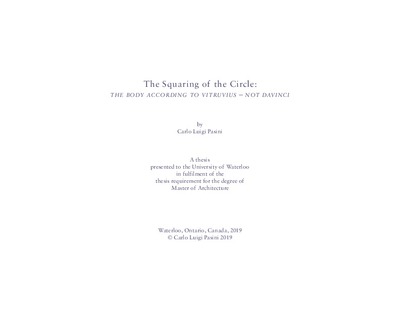 An excerpt from a literary work of Classical literature is rendered in a self-directed manner. The literary passage in question is a description that was given at the turn of the current era by the architect, Vitruvius, in the treatise that he wrote for the Roman imperator, Augustus. The description is the same one that later inspired the Renaissance artist, Leonardo daVinci, to sketch the figure of a nude male, whose hands and feet are transposing a square and circle – The Vitruvian man. After the most reliable copy of the treatise by Vitruvius is determined to be the Mediæval manuscript archived at the British library, under the code number, 2767, in its Harlian collection, a digitisation is obtained from the library’s digital imaging services; the folios onto which the excerpt was copied are then isolated from it and further formatted, so that these facsimiles of the script can be layered to allow for the description to be traced. To begin the rendering process, the tracing of this script is transcribed into a legible format; then, the transcription is emended of idiosyncratic punctuations, shorthands, and spellings, which its Carolingian copyist adopted, but that its Classical author would not have adopted. Next, the part-of-speech of each word is analysed through a prototypical mnemonic system; and then, the stylistic word-orders used by the author/copist are parsed into analytical ones. To end, the parsed text is edited to give value to as many of the zero-value terms as possible, before the edited text is translated word-per-word, using either a word's cognate or latinate. Once done, the translation is enacted with the aid of architectural drawings to get feedback on whether or not it makes sense in time and space. In turn, this feedback loop repeats itself until an iteration is rendered that yields a reenactment, which cannot make any more sense.