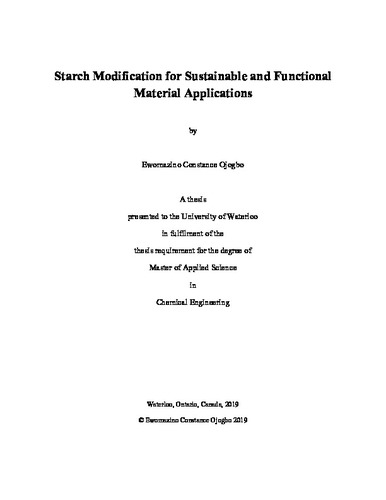 Among biodegradable polymers, starch has attracted significant interest and is currently used in numerous industrial applications. This is because of its renewability, biodegradability, abundance, and cohesive film-forming properties. Moreover, the hydroxyl (-OH) groups associated with the anhydroglucose units provide it with several modification possibilities. These features resulted in a substantial interest for its use in several advanced functional material applications in addition to the typical consumer plastic applications. This thesis focuses on modification of starch for functional material applications where starch is used as one of or the major constituent. The goal is to create polymeric materials based on starch and targeted two material applications: Hydrophobic and melt processable starch esters for possible degradable plastic applications, and antimicrobial polymer surfaces for packaging and biomedical devices where starch is used as the major constituent. The use this biodegradable polymer could potentially complement and replace non-degradable polymers obtained from fossil fuels such as polyethylene and polypropylene. However, its hydrophilicity, limitations in thermal and mechanical properties, rapid degradability, and strong intra- and intermolecular hydrogen bonding in the polymer chains limit its melt processability and subsequently its widespread commercial application as a renewable polymer. It is therefore necessary to modify it to mitigate these limitations and bring about other desirable properties. To achieve this goal, a controlled modification of starch to replace the -OH moieties was carried out using reagents that target the required applications. The extent of modification which is tunable is estimated based on the degree of substitution or percent grating efficiency. Based on this, the effect of modification can be analyzed using different techniques. In the first study, an esterification of starch using an activated fatty acid (lauroyl chloride) was carried out in a controlled reaction conditions. An analysis of the modified starch esters revealed melt processable and thermoplastic starch with film forming properties. This implied that the esterified starch could be used in industrial thermoplastic and melt-processable applications without the use of external plasticizers or modifiers. In a second modification, a systematic study was carried out to investigate the antimicrobial efficacy of starch as an antimicrobial carrier to prevent the leaching out of the antimicrobial agent, to create antimicrobial surfaces for packaging and biomedical surfaces applications. Antimicrobial properties were introduced on starch by grafting with the biocide, polyhexamethylene guanidine hydrochloride, in a two-step homogenous reaction process. The modified starch was then incorporated into PLA films at various concentration and the antimicrobial efficacy is evaluated by testing against a Gram positive bacterium, Bacillus subtilis and a Gram negative bacterium, Escherichia coli using a shaking flask method and an agar plate assay. The results revealed that the polymer surfaces have high antimicrobial potency and deactivate or reduce the growth rate of bacteria on contact. This material has great potential for use on surfaces requiring minimal to no bacterial contamination such as medical devices and food packaging applications.