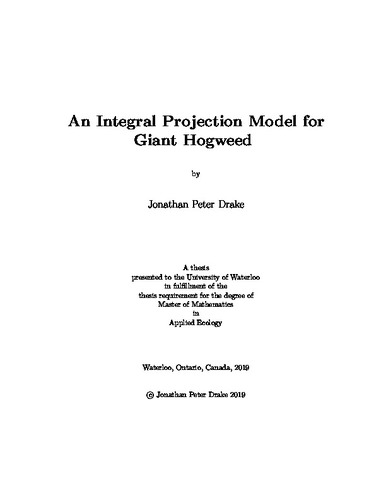 In this thesis I investigate the impact that the choice of model may have on predictions of giant hogweed population dynamics. It has been shown in two case studies that population growth rates predicted by matrix population models may be biased if the number of plants sampled is low and plants are classified based on a continuous measure of their size. These same studies have shown that integral projection models do not provide biased estimates of population growth rates for populations with few plants sampled. In chapter 2 I construct a density-independent integral projection model for giant hogweed population dynamics and I use it to verify that the population growth rates do not significantly differ from a previously published matrix model of giant hogweed population dynamics. This research indicates that the conclusions made using the matrix population model are unaffected by the decision to discretize plant size. A second major topic of research for giant hogweed populations is to predict the rate at which the species spreads. It has been shown that the rate of spread of a plant may be affected by the number of seeds produced by the population. In chapter 3 I develop two density-dependent integral projection models for giant hogweed populations and compare the total seed production predicted by each model. In both models I allow for recruitment to be limited by competition among seedlings. However, in the second model I also allow the probability of flowering to depend on intraspecific density. I find that the model with density-dependent flowering has oscillatory seed production and that the model predicts significantly fewer seeds every other year compared to the model with density-independent flowering. I conclude that accounting for competition among adult plants may affect predictions of the rate of spread of giant hogweed.