The Detail, Photographed: Reimagining the Monument 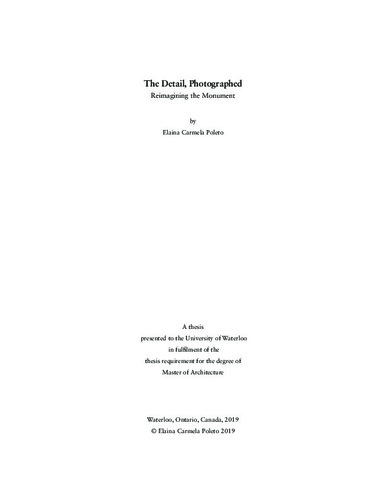 Architectural monuments lie scattered in small communities throughout Ontario, hidden by the everyday, masked by the sub-urban streets. The sub-urban streets where I lived felt impersonal and unnatural, with cookie-cutter designs and sterile atmosphere, with no sense of place. This lack of character, this illusion of the perfect suburbs, inspired the search that went beyond the ordinary to seek out the extraordinary. I began a pursuit to find monuments with value, to explore their histories, to observe their architecture, to photograph with a new perspective. I chose eight distinct heritage buildings to explore. Each preserves an identity, each holds expression, manifests character, each became a monument to my observations. One can appreciate the thoughtfulness that went into every detail, the craft that went into every patterned brick, the design that locates the heart of the home. Observations shape unnoticed potentials; they change each building, bringing it into the present. A photograph must do more than freeze time. Photography, like other creative acts, must interpret its subject matter. A photograph is powerful; it can be uplifting, it can be insightful, moving, and even imaginative. But when a photograph is part of a series of photographs, an accumulation of details that unfolds the story of a building, then it’s not just about what an individual photo says by itself, but instead it is about how the image forms connections with other stories, histories, forces, and sensations. This thesis in its entirety is an experiment, formed from individual elements brought together, creating unforeseen connections. It is for the observer to define what they see in the history, the images, and the narrative.