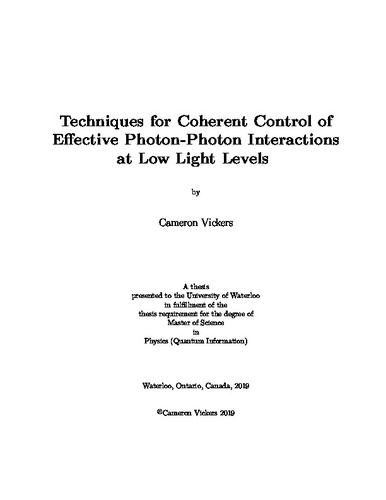 This thesis proposes improvements on techniques for the coherent control of photon-photon interactions mediated by a cloud of cold atoms. Atoms cooled and trapped in a MOT can be loaded into a hollow, photonic crystal waveguide to ensure light coupled into the waveguide is localized on the tightly confined atoms. The low temperature of the atoms decreases decoherence rates, and improves coherent light-matter interactions, such as electromagnetically induced transparency and slow light. Predictions are made for two future experiments using this system, modulating of the phase of a laser beam with a much weaker one, and modulating the transmission of a laser through two photon absorption. These predictions indicate that the phase of a 0.1μW laser beam can be modulated by as much as one milliradian per weak laser photon, and that a 800pW laser beam can modulate the transmission of a comparably powerful laser by as much as 60%. Both of these predictions would be improvements on results for similar experiments performed with warm atoms.