Applications of Artificial Intelligence to the NHL Entry Draft 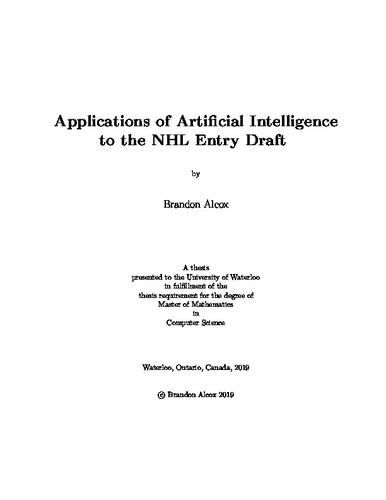 This thesis investigates the application of various fields of artificial intelligence to the domain of sports management and analysis. The research in this thesis is primarily focussed on the entry draft for the National Hockey League, though many of the models proposed may be applied to other sports and leagues with minimal adjustments. A utility model is proposed to define which players are preferred by which teams for a given draft. This model allows for the consideration of how teams acting in a multiagent system may reason about each other's preferences, as well as how they might strategize and interact with one another through trades. A trading scheme where agents may trade picks with each other to change the picking order is established and an algorithm is proposed to find optimal trade offers to propose under an imperfect knowledge setting. Through simulations based on the National Hockey League Entry Draft data, the algorithms provide mutually beneficial trades that also increase the social utility of the league over the course of the draft. Machine learning classifiers are proposed to suggest which prospects will be successful at the highest level of the sport over various metrics using statistics and scouting reports from their draft year as features. The classifiers out-perform conventional draft selections in the NHL and provide insights into which attributes of a player are important in development. Clustering techniques are used to determine playstyles in the NHL and these clusters are fed as annotations into additional classifiers to project which prospects will fall into certain clusters later in their careers. These latter classifiers demonstrated promising results but were ultimately limited by the availability of data. A discussion of future avenues of artificial intelligence research in the young but growing field of sports analytics is carried throughout this thesis.