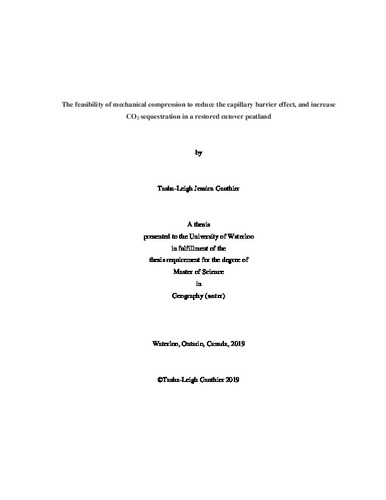 Ten years after restoration was implemented at the Bois-des-Bel peatland (BdB) in Quebec, there was limited hydrological connectivity between the regenerated Sphagnum moss and the remnant cutover peat due to the formation of a capillary barrier. This resulted in lower soil water content of the regenerated Sphagnum moss compared to a natural analogue, which may limit carbon sequestration potential. It may take > 40 years for the moss layer to compress and degrade to overcome this capillary barrier effect. Mechanical compression in a laboratory setting has demonstrated its potential to alter the hydrophysical properties of the moss; however, field studies are required. This study evaluated the effectiveness of field-based mechanical compression to ameliorate the capillary barrier effect, and increase CO2 sequestration in restored cutover peatlands. Two fields at BdB were compressed using a John Deere 6430 series tractor in January 2016, followed by hydrological and CO2 flux monitoring May-August 2016. The compressed fields were compared to a nearby uncompressed field, and a natural peatland ~2 km away to determine relative success of mechanical compression. Field compression resulted in a moss height reduction of 8.5 cm (48%), an increase in bulk density, and a reduction in the proportion of macropores throughout the moss layer. Compression increased soil water retention and as such, the average soil moisture content in the Compressed site was consistently higher throughout the moss profile than in the Uncompressed site. This indicates a decrease in the capillary barrier effect, and an increase in moss resilience to drying, though the degree of increased resilience is unknown. The proportion of macropores in the Natural site was much lower than the Compressed site as mechanical compression did not create the same hydrophysical properties of natural decomposition and compression. Despite the increase in water content in the Compressed site, moss productivity was not significantly higher than the Uncompressed site (p > 0.05; Kruskal-Wallis one-way ANOVA on ranks). Further, ecosystem respiration significantly was higher in the Compressed site (p < 0.01, Kruskal-Wallis one-way ANOVA on ranks), causing the area to be a slightly weaker CO2 sink. Having not characterized the increased resilience to drying, and with the increase in CO2 release, mechanical compression cannot be recommended without further investigation. Future work may include modelling of the moss hydrophysical properties to better characterize the resilience to drying after compression, and testing compression at an earlier stage of restoration to enhance CO2 uptake in moisture limited conditions.

Tasha-Leigh Gauthier (2019). The feasibility of field based mechanical compression to reduce the capillary barrier effect and increase CO2 sequestration in a restored cutover peatland. UWSpace. http://hdl.handle.net/10012/14442