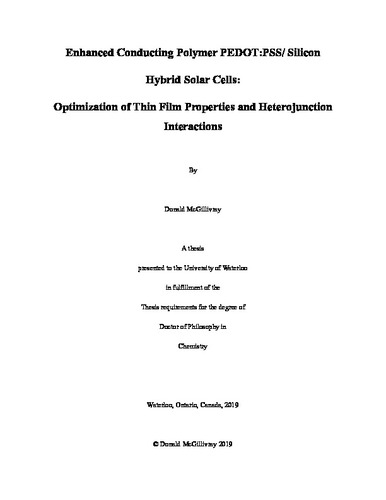 In this work the operating properties of PEDOT:PSS - silicon hybrid solar cells were carefully studied. The motivation is to find a cost-effective alternative to some of the energy, environmental and sustainability issues the world is currently facing. Solar cells are already providing plentiful renewable energy but they remain constrained by inflexibility, weight, cost and efficiency. Overcoming these obstacles will allow these energy producing devices to become widespread and, along with them, new technologies and economies to emerge. Hybrid solar cells (HSCs) address these issues by junctioning conducting polymer with an inorganic semiconductor. The beneficial properties of these materials can be exploited to improve the cost effectiveness, flexibility, and ease of processing of the polymer, and the electron lifetime and diffusion length, and stability of the inorganic material. PEDOT:PSS and n-type silicon is one such HSC with easily reproducible high efficiencies around 12% that could greatly reduce the cost per watt ratio and other challenges associated with conventional silicon solar cells. In Chapter 2, the material properties of inorganic semiconductors, focusing on silicon, are introduced and the details of Schottky junctions, p-n junction and solar cells properties are discussed. These properties are compared and contrasted with conducting polymers, focusing on PEDOT:PSS, which function in a fundamentally different way from inorganics in that charge mobility is much more limited to intra or inter molecular transport. Finally the physics behind thin films and surfaces for the absorbance of light is examined. In Chapter 3, a novel method of increasing the conductivity of PEDOT:PSS was found by post-treating pre-deposited films with a 50 vol% ethylene glycol/methanol mixture. This post-treatment method more than doubled the conductivity to 1334 S/cm over the method of adding an ethylene glycol co-solvent to the PEDOT:PSS solution (637 S/cm). It also reduced the film thickness in half (51%) due to the removal of PSS. The treatment resulted in PEDOT to have a greater quinoidal character, and because of the decrease in PSS, more defined PEDOT containing nanodomains with the chains laying horizontal to the substrate. In Chapter 4, the optical properties of the films were studied using a single stack layer to model the reflectance of PEDOT:PSS on silicon and to determine the effects of film thickness on short circuit current density (JSC). Using the complex refractive index, the reflection of PEDOT:PSS films and silicon respectively, and the phase shifts found from fitting experimental transmittance and reflectance data, the external quantum efficiency (EQE) for the cells could be simulated. The JSC calculated from these results showed that JSC followed a sigmoidal curve and the highest value 28.3 mA/cm2 was obtained at a thickness of 85 nm. Interestingly, the post-treated cells had overall lower JSC with a maximum of 26.2 mA/cm2 at 63 nm due to the increased anisotropy, absorbance and series resistance. A comparative measure of resistivity was performed by removing the optical component from the quantum efficiency to reveal the electrical contributions and by fitting the data using a modified single diode equivalent circuit. This indicated that the resistivity was 75% higher for the post-treated films over the co-solvent films. Using the absorbance, reflectance, and EQE models for the optimal thickness of 85 nm, the optical generation and loss mechanisms could be calculated: 61.5% of the incident light was converted into current, 22.2% was lost to reflectance, 6.9% was absorbed by the film, 2.7 was absorbed by the rear electrode, and 6.7 was lost to recombination at the surface and in the bulk silicon. In Chapter 5, the PEDOT:PSS/silicon heterojunction was studied and the influence of passivation layers was examined using dark current density curves and the open-circuit voltage of the cell. It was discovered that the size of the native silicon oxide layer could be determined by the blue shift in the Raman Cα =Cβ band. It was noted that the native oxide continued to grow uninterrupted after PEDOT:PSS was deposited on hydrogen-terminated silicon resulting in a contaminated native oxide layer with decreased performance. It was concluded that the contamination at the surface, increased defects and Fermi level pinning could cause a decrease in band bending, leading to increased carrier recombination and poor performance. Allowing a controlled native oxide layer to grow to 2 nm in a clean environment increased the inversion layer and performance. The increase in bi-polaron modes with post-treatment together with the increased concentration of PEDOT and the effective density of acceptor states resulting from the removal of PSS, caused a stronger inversion and electron blocking at the interface. Finally in Chapter 5, P3HT was used as an interfacial layer between PEDOT:PSS and silicon. It was found that spin-coating a solution of P3HT dispersed in dichlorobenzene on silicon produced a homogeneous layer of small interconnected nanocrystallites. When applied to HSCs, no charge separation or transfer originating from the P3HT chromophore could be detected indicating the inversion layer existed entirely within the silicon substrate. However the larger open circuit voltage and change in dark saturation current undedicated the layer blocked electron majority carrier transfer from the silicon, increasing shunt resistance and open-circuit voltage. By combining the research of into short-circuit current density, and open-circuit voltage, it was concluded that the highest achievable efficiency of the setup used in this research was 11.8%.