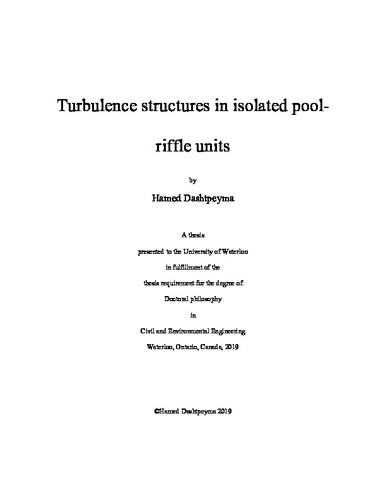 The macroscale morphology of a river has significant effects on sediment transport, flow pattern, bed stability, and ecosystem function. Pools and riffles, which are respectively the deeper and shallower parts of the bed, are a common morphology that is formed naturally in many rivers and also used as an analog in stream restoration. However, the formation and maintenance mechanisms of these structures remain unclear. Most of the previous studies on pool-riffle maintenance and shaping mechanisms did not consider the effects of riffle height, stream width variations, and constrictions on stream flow patterns and turbulence. These studies also did not comprehensively investigate different responses of sediments to turbulence. The contributions of this thesis can be summarized as 1) identifying and characterizing turbulent structures in idealized pool-riffle units based on transient turbulence modelling; 2) studying the effect of pool-riffle geometrical parameters on turbulent structures, and 3) studying the influence of turbulent structures on sediment transport. Riffle pools are defined by their undulating bed, and for this reason the simplest geometry of the bedforms we investigated were bed rises in straight channels similar to broad crested weirs. Other investigated geometries considered the additional effects of local constrictions in width and the overall width of the channel. The research is a combined numerical and experimental study of turbulent structures and sediment transport in idealized pool-riffle units. Large eddy simulation was used to capture detailed information on flow characteristics. The numerical simulations were then validated using previously reported results and the experimental part of this study. The Q-criterion was used to detect turbulent flow structures in simulation results. For the experiment on sediment transport, a visual qualitative scoring method was designed to assess sediment entrainment. Velocity profiles were acquired in the lab using an acoustic Doppler profiling velocimeter (Vectrino II) to validate the simulation results. In the results, four types of vortical structures that largely control the flow pattern were identified, namely, (1) ramp rollers, (2) corner eddies, (3) surface turbulent structures, and (4) axial tails. Ramp rollers are shaped on downsloping ramps, corner eddies are formed at the corners of pool heads, surface turbulence structures are shaped at the free-surface of pool-head, and all the generated vortices in the pool-head get stretched and form axial tails vortices. Pool-riffle geometry (riffle height, width size, and width constriction) and hydraulic characteristics (sub or supercritical flow types in riffles) exert a strong control over the size and strength of vortical structures as described below: • Higher riffles create stronger ramp rollers and corner eddies. • If the riffle height creates critical or supercritical flow in the riffle, surface undulation hydraulic jump will create strong surface turbulent structures. • Wider channels provide more space for the shaping of corner eddies and ramp rollers. • Width constrictions amplify corner eddies and ramp rollers and create horseshoe vortices in the upstream at convective accelerating flow zone. • Even in subcritical flow condition, strong corner eddies can be transported to the free surface and shape boiling structures in the form of surface turbulence. These structures are generated as a result of flow deceleration and are large structures generated away from the boundary and so are not thought to be dependant on surface roughness. To help unite the observations of the interaction between the main flow and turbulent structures, the ‘vortex-resistance hypothesis’ is proposed. The hypothesis is based on the idea of eddy viscosity, which models the effects of turbulence as increased viscosity that exerts a force on the main flow. Using this concept, vortical structures increase the effective viscosity, which in turn increases the resistance of highly turbulent regions to the flow and thus steers a high velocity core of fluid through the pool. Interaction and combination of the aforementioned four vortices types are shown to create three different types of flow through the pool, which are called ‘skimming,’ ‘rifting,’ and ‘plunging’ flow. Building upon the ‘vortex-resistance hypothesis,’ if surface turbulences are stronger than the ramp rollers, they combine with corner eddies and direct the incoming flow to plunge into the pool. If ramp rollers are strong and the surface turbulence is relatively weak, the ramp rollers push the incoming flow to skim the free-surface. If they both have similar strength, the flow has a high velocity core in the middle of the flow depth resulting into a rifting flow. These results help to explain the variety of flow patterns that have been identified in the previous field and laboratory experiments and highlight that the hydrodynamics of pools and riffles may be entirely different depending on local geometry, flow stage and the Froude number. Vortical structures increase the pulsation and mean shear stress if they are close to the bed. Based on observations of sediment entrainment and deposition, it appears that a zone with local low shear stresses at the end of the downsloping ramp can trap the large particles before they enter the pool. The particles that pass the trap point will be washed away from the pool head due to strong turbulence in that region. The vortical structures become weaker as they travel downstream; therefore, the bed mean and shear stress pulsation decrease as well. Moreover, the transported particles are likely to be deposited respectively by their size further downstream, with only the smallest particles being transported through to the next riffle. The research presented in this thesis offers a new look into the hydraulics and the variability of hydraulics in pool-riffle units. The variety of turbulent structures and flow regimes in the pool has the potential to unite a wide set of seemingly contradictory observations and hypotheses that have propagated through the literature on this subject. The research also has important implications for design that should lead to better rehabilitation and maintenance strategies for natural or restored streams. The original scope of work should be extended to include more realistic natural shapes for the bedforms with lateral asymmetry and meandering, but the richness of behaviours and similarities with more complex forms of these structures necessitated a deeper examination of these relatively simple forms before extending the results to real systems.